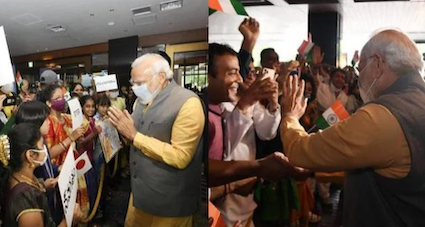 Prime Minister Narendra Modi landed in Japan on Monday for a two-day visit. He touched down in Tokyo to attend the Quad Summit on May 24 at the invitation of Japanese Prime Minister Fumio Kishida. Ahead of the summit, PM Modi has now penned an op-ed piece on India-Japan relations for a Japanese daily.

PM Modi penned a write-up in the Japanese newspaper, Yomiuri Shimbun regarding the “vibrant relations” between India and Japan. Ahead of his visit to the QUAD meeting, PM Modi shared the op-ed on his Twitter handle and noted that the article underscores India and Japan’s “partnership for peace, stability and prosperity.” The Indian premier, in his write-up, addressed various types of partnerships maintained by the two nations and even addressed the Indian diaspora in Japan and lauded their contributions to the Japanese economy.

Speaking about the bilateral relations between India and Japan in his article, PM Modi stated that “special, strategic and global” were the three words that describe the relationship between the two countries. “As the two countries celebrate their 70th anniversary of diplomatic relations, this deep relationship lays a solid foundation for a mature partnership between India and Japan in modern times,” PM Modi wrote.

“From the automobile industry to the industrial corridor, Japan’s investment and development support footprint extend throughout India. The two countries have had long-term traffic since the establishment of diplomatic relations in 1952. However, in my opinion, the best time is yet to come,” an excerpt from PM Modi’s article read.

Furthermore, PM Modi went on to speak about the economic growth of the two countries and mentioned how the countries are looking to revitalise after the COVID-19 pandemic. “India and Japan are now looking to revitalize and rebuild their economies during the post-coronavirus period, further deepening our involvement in all areas, from trade to investment to defence and security. There is room for unknown,” the PM in his op-ed.

“The spread of the new coronavirus infection, global tensions, and destructive actions that could threaten the stability and security of the Indo-Pacific, build a robust supply chain that is not dominated by coercion or exploitation, human-based development models and power reiterated the need for stable international economic relations,” PM Modi added. Meanwhile, speaking about the economic relations between the countries over the years, PM Modi took note of the contributions made by the Indian diaspora in Japan to the country’s economy and Japanese businesses’ contributions to the Indian economy and wrote, “Many Indians are now working in Japan and contributing to the Japanese economy and society. Just as Japanese business executives are contributing to India’s economic growth,” he mentioned.

Penning the op-ed ahead of the QUAD meeting, the PM also mentioned the countries’ shared vision in development, infrastructure, connectivity, sustainability, health and vaccines.

“The peaceful and prosperous Indo-Pacific region is also very important for a better future for the whole world. A crisis can sometimes be a bigger challenge and accelerate change. That is why, now that the world is at a turning point, the cooperative relationship between the two countries requires heavier responsibility and urgency,” PM Modi said ahead of the QUAD meeting in Tokyo. He went on to add that India and Japan “can meet the demands if they have everything they have built over the last few decades that they share”.

Prime Minister Narendra Modi on Monday arrived in Tokyo, Japan for a two-day visit to attend the Quad Summit on May 24 at the invitation of Japanese Prime Minister Fumio Kishida. The Summit is aimed at bolstering cooperation among the member nations of the groups – the US, Australia, India, Japan, and further discussing developments in the Indo-Pacific region.

In the meantime, the Quad Summit will be the fourth interaction among the member nations since their first virtual meeting in March 2021. Apart from PM Modi, the summit will be also attended by US President Joe Biden, Japanese Prime Minister Fumio Kishida and Australian Prime Minister-elect Anthony Albanese.