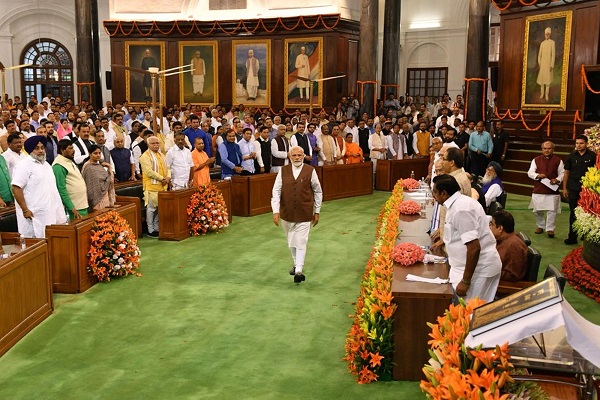 The very headline demands a comparison. Pt. Jawaharlal Nehru had his own view of India, not the one he shared with his mentor Mahatma Gandhi. Views on science was one thing, Hindus were another. Gandhi’s India was more than just Hindus, often at its cost. Nehru’s India could do without Hindus. For their own reasons, almost a century they shared between them (1869-1964), never made Hindus a political question.  Hindus, “the bloodiest story in human history” as historian Will Durant put it, remained unattended.

Indira Gandhi didn’t burden herself with the weight of ideology. Power was all that mattered. Two notables which she is credited with, probably owed little to her. The liberation of Bangladesh was an Indian army’s gift. Indeed, New Delhi held back the permission to storm Dhaka well beyond the expiry date. The storming of Golden Temple, and clearing of Sant Jarnail Bhindranwale and his proverbial 40 henchmen, was the outcome of her own experiment which went horribly wrong. Between the imposition of the Emergency and her butchering of Constitution–“secular” and all–it’s difficult to say which was worse.

Rajiv Gandhi, the reluctant politician, was terrible on Sri Lanka’s Tamil issue. He paid with his life in the end. He also apparently had a blood-streak in him which his velvety profile hid well. Ask the survivors of 1984 Sikh Progrom, it’s justice in perpetual limbo.  He also carried on the tradition of Muslim appeasement which under Mahatma Gandhi had cost India  its western and eastern arms.  He upturned the Supreme Court verdict on Shah Bano which had granted the divorced woman the right to alimony. Sharia Law had trumped democracy. India was rightly perceived to be a soft state by fundamentalists.  It gave wind to separatists in Kashmir.

Thereafter, terrorism became the headlines. Hindus were shown the chimera of independence as lakhs of them were driven out of Kashmir Valley. Atal Behari Vajpayee favoured peace with Pakistan and got Kargil in return. Vajpayee was no ordinary leader though. He made India nuclear. It was a game changer in India’s security doctrine. Vajpayee also did bold reforms in education and infrastructure.

Manmohan Singh was an economist at the service of politicians. He was a dummy prime minister, an accidental one, who turned a blind eye to scams dancing under his chair. Pamphleteers give him credit for opening up the Indian economy. In essence, he only carried out the dictates of his prime minister Narasimha Rao who didn’t belong to Nehru-Gandhi clan. His has been a pursuit of power, of communal bias— “Muslims have the first right on India’s resources” – and between visits to hospitals, he is presently panting for a Rajya Sabha seat.

In all these pre-Modi years, India wrestled with hunger, wars and terrorism as its three key moments. In the 60s, India was without food. Wars bloodied its earth virtually every decade. Terrorism brought death to cities after 1990. Mumbai’s 26/11 was as big a psychological scar to India as battles of Panipat from Babur to Ahmed Shah Abdali. Rich made the best of licence raj; poor couldn’t even enter a park. Police and bank accounts were out of bounds. Subsidies were for the middlemen. Entrepreneurship a sin and a road to suicide. Mandal Commission–oh we forgot VP Singh–created regional satraps in Mayawati and Yadavs on the plank of Dalit politics.

No Hindu-Muslim in reforms

Yet, this is not what makes Modi India’s greatest prime minister ever. It’s about vision–which is not ideology–where he seems to be up against the world. He dreams of a safe, prosperous and united India but not at the cost of Hindus. It upsets a hell of a lot of people.

Let’s begin with Kashmir. He has restructured the former state which was manipulated by Nehru-Gandhi clan to ensure Kashmir Valley always wins. In due course, it became a personal fiefdom of Abdullahs and Muftis. Now the assembly seats, whenever elections are held, would see a balance in proportion to size and population. There is not an ounce of evidence to suggest it is against Kashmiri Muslims. But there is plenty to suggest it would hurt the entrenched regional dynasties who had turned a blind eye, if not aided and abetted, the terrorism from across the border. Muslims in Kashmir Valley were in pits in all these years. They could only look up.

An impartial history would judge Modi as an Indian who saved India’s borders which Prithvirajs, Gandhis and Nehrus couldn’t do in a thousand years. Kashmir was a lost case. In 2047, it would’ve been hundred years to that thorn. It was not a matter of if, but only of when, India would become the rest of Kashmir.  In the age of Islamic State (IS) and its known cahoots in India this was given. My children, and their children, and their children, have been blessed with that one ring of security which is Modi’s offering at Mother India’s feet.

Then, we have Ram Janmabhoomi. This was hanging fire much beyond our independent years. Nothing had been in doubt: That the Babri Masjid had been built over a temple; that it was a mosque in disuse; and that mosques are routinely removed in Saudi Arabia. Yet, Hindus were denied a home for their supreme deity in their own land. Modi has managed it without resorting to unconstitutional norms.

One half of India’s 200 Muslims, their womenfolk, had a constitutional disadvantage due to a practice which isn’t objected to by Sharia Law even though the Holy Book probably doesn’t sanction it. A husband could take away his wife’s investment of her life and career in him by simply pronouncing triple talaq. This was slavery within homes. It hurt Muslim women, their kids, the family, the society and the nation. The Triple Talaq Act 2019, which had been approved by Supreme Court but stuck in Parliament on numbers, was finally enacted within days Modi assumed his second term. This was the first definite step towards Uniform Civil Code (UCC) which is desired by the Constitution.

Lynchings and its truth

It’s said Muslims are unsafe in Modi’s India. Lynchings are cited as proof. I remember so clearly the early days of Modi’s first term when this word was repeated ad nauseam. A few scribes and newspapers worked in lockstep on this agenda. You couldn’t pick up a newspaper where “lynching”, real or fake, wasn’t mentioned. Lynchings have always happened in rural India where cows are wealth and people would give life to protect them. It’s no different to how anti-CAA and now migrants have been picked for propaganda though they couldn’t care less for Muslims or poor.

This anti-India lobby of journalists, politicians and their foreign handlers see an existential threat in Modi. He is a Hindu in thought and action but they would rather portray him as anti-Muslim. It’s easy to sway millions of Muslims for most are uneducated and poor; and have a latent fear of Hindu’s rise. This frenzy would again be on us once Corona Virus recedes in the background.

Modi’s position is secure in history. His real test would be coming four years. Anti-India lobby, which includes Jihadis, Communists and imperialist forces, won’t give him a moment’s respite on Muslims. Modi is a nationalist and nationalists are always a threat to these global forces.  I predict an anarchy on streets where police would be immobilized. Any action they take would have screaming headlines and images in next day’s daily. It in turn would bring pressure groups such as the United Nations, European Parliament, George Soros etc. into play. Police would freeze; the anarchy would bring in violent mobs in a bid to overthrow him. This is a script I am reading it out to you in advance. How Modi responds, we would see.

We haven’t touched how painstakingly Modi has invested his time and energy to be a world leader of considerable respect. Or how, if we beat Corona, he would invite books of gratitude. He doesn’t part with national coffers easily which is a leeway we must grant to a Gujarati. But the sum is always greater than the parts and it’s the whole which makes Modi the greatest ever.