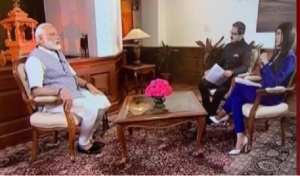 In what could be termed as the most frontal attack in mirroring the lack of integrity of Lutyens Media, Modi picked upon one of its poster boys, ABP News, in hiding the proof-laced expose of Opindia.com on Congress president Rahul Gandhi and his clandestine means of earning money and assets.

“Do you have the guts to question (Rahul Gandhi)? What’s your (ABP) compulsion? Why don’t you bring the truth out,” Modi didn’t pull any punches as he made his ABP interviewers, Sumit Awasthi and Rubika Liyaquat duck for cover.

The interview clip, which is presently the rage on social media, is a matter of deep embarrassment for Lutyens Media and a testimony to prime minister being unafraid of what he termed as the “ecosystem” of India.

“In last 10 days, in an online magazine, there’s story on (Rahul Gandhi) corruption charges with evidence. There are sources (ascribed) to the evidence. The finance minister of the country does a press conference on the basis of that online magazine story. Your ABP blacked it out. Your ABP didn’t make it (a matter of panel) discussion,” dared the Prime Minister in ABP’s own den.

“Your ABP, on the basis of a fake story, are ready to question the Prime Minister of the country. You can dare (there). But your ABP blacks out the press conference of India’s finance minister).”

The remarkable aspect of Modi’s flurry of punches was the number of time he took ABP’s name and shamed them. He picked on the needless controversy on Rafale to train his guns on ABP.

“If you (ABP) news can’t trust Supreme Court, what could be a more sorry state of affairs? Will you not believe CAG? Not French president, French government? Not Indian government which said so much in Parliament. You wouldn’t believe it? You are so biased?

“And I am straightaway putting this allegation against the ABP News. One thing which has not been proved anywhere, ABP news doesn’t have the courage to ask the liars. You talk so much about freedom of media. For six months a lie is being repeated and repeated.  Not a single question you have asked. We have replied everything in Parliament. Even then you didn’t have the guts to ask them the question. What’s your compulsion—only you must be knowing.

“In social media, even one thing comes bad, you play it 24 hours. Make it headline news. But do not have the guts to question (the family)? What’s your compulsion? Why don’t you bring the truth out?

“If we do legal action, you say why we are against the family. So even here, your question is directed against us.

“I am shocked, what’s your compulsion.”

As Modi rained verbal missiles, Sumit Awasthi murmured a weak defence: “No compulsion, when we get them, we would ask them too.” (So folks watch out if Rahul Gandhi gives ABP an interview and the channel asks him about OpIndia’s expose).

There was no stopping Modi though. “I am putting a straight allegation against the ABP…I do it straight in front of your cameras.”

Modi, in his recent TV interviews, have made scathing attacks against Lutyens Media. It’s a must watch, not only to see how he is taking on the ecosystem but also to get a drift of his government’s achievements which despicable media is doing its best to hide or edit out.