Modi pulls plug on US agenda 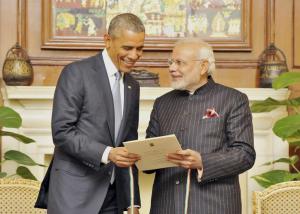 No words of praise could be enough for the Modi government to refuse visas—SO FAR!—to two US officials, Susan Coppedge, anti-trafficking ambassador and Randy Berry, special envoy for LGBT (lesibian, gay, bisexual and transgender) to India.

The present Indian government has clearly seen the link between drummed up “growing intolerance/horrific-women-conditions in India” mouthed by superstars of holy piety such as Barack Obama and Melinda Gates, the top financial dog Moody’s, and shameless mainstream Indian media which wouldn’t mind sacrificing national interest as long as they could wag tails to their masters of faraway lands.

The clearly orchestrated campaign of foreign forces which drew on Indian academicians and mainstream media (as detailed in my reports in the embedded links of the previous para) did succeed in Bihar elections.

But the ferocity and persistence of their campaign—similar in proportion to actual incidents as you seeking out paratroopers to chase away a monkey on your cot—left no-one in doubt about their methods and agenda.

Right on cue, the media reported of the “concern” of British parliamentarians; their determination to raise the issue of “intolerance” with Modi on his visit to UK, post-Bihar elections. Amartya Sen, with all the gravity at his command, plunged the dagger deeper in a conference to his British audience.

The lines are clearly drawn in the sand against the Modi government. In coming weeks and months, you would find many reports in our pious media of “intolerance,” bloated reporting on violence against the minority, so as to show the present government in poor light.

Lest you run away with the impression that I am a foot soldier for Modi, let me reaffirm that I am unconvinced if the present government doesn’t have a communal agenda or the top-down economic policy is the right way.

But I do feel Modi wants a resurgent, strong, independent India and this is something which the West would resist with all their might. They would rather have a weak India which they could twirl on their little finger. We have seen the fate of independent-minded nations—Iraq, Libya, Iran, North Korea, Syria, Russia, China—to think of anything else.

How West uses the “human rights” issues, in concert with servile mass-media, to push its agenda was most vivid during the Sochi Winter Olympics in Russia last year.

Much before the Olympics began, the US media stirred up the “anti-gay image” of Russia in its columns and editorials. The impression was created that homosexuals were being persecuted in Sochi.

Neither Obama nor any official from his administration attended the Games. So was the case with European Union (EU) presidents and prime ministers.

And what is this so-called anti-gay law in Russia? It’s sole intent is to stop minors being influenced by homosexual propaganda. Homosexual groups remain legal in Russia.

Putin, in his own words: “Gay people have nothing to fear in Russia as long as they leave our children alone.”

But that’s unacceptable to West. United States wouldn’t mind sharing the bed with Saudi Arabia who are known to punish homosexuals with fines, torture or corporal punishment.

“Human Rights” issues don’t matter when it comes to concentration camps and bombing hospitals and civil weddings not to speak of predator drones.

India is wary of such “human rights” agenda and rightly so.

A US official has said that no anti-trafficking czar has visited India for the past eight years.

Indian ambassador to US, Mr Arun K. Singh, was straight as an arrow on the issue:

India was prepared to work in an international framework to tackle the problem of trafficking but rejected “unilateral assessments of another country.”

“We will never accept it.”

Multipolar world is essential to humanity’s survival. The hegemonic stance is stifling and destructive. India has made many positive moves in recent days—such as working in close cooperation with China on terrorism and looking to buy most advanced anti-ballistic S-400 missile system from Russia—which suggests its desire to keep its options open on national issues without becoming anyone’s lackey.

Despite two visits of Modi to the United States and a similar number of visits by Obama to India, the Indian government has shown it would walk up the garden path only to an extent.

The only cost you would pay is with your morning newspapers: From now on, read and count how many plugs you see in newspapers from “think-tanks and foundations” on why India must join the Trans Pacific Partnership (TPP) when the offer comes in the second round; and how its “intolerance and human rights” issues concern the international community.

As Indians, the least we can do is to be aware of these machinations. The newspapers sadly are meant to brainwash you. Read between the lines and make up your own mind. A strong India is desired by us all.