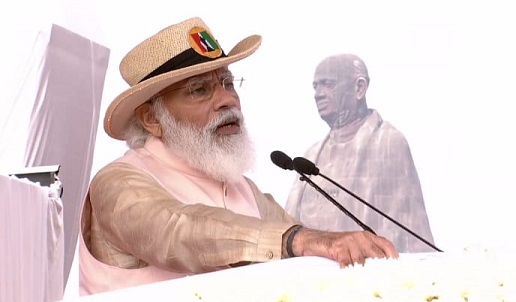 Prime Minister Narendra Modi reminded the nation of those people who were playing “dirty politics” when the truth of Pulwama terror attack was accepted in Pakistan Parliament this week.

India lost 40 of its brave CRPF soldiers when they were moving in a convoy and it was blown apart by a suicide bomber. This Pulwama incident was acknowledged by Pakistan’s science and technology minister Fawad Chaudhary during a debate in the Pakistan’s national assembly. “Humne Hindustan ko Ghus Ke Maara,” he had said.

The prime minister was addressing at Kevadiya in Gujarat after paying tributes to Sardar Vallabhbhai Patel at the Statue of Unity on India’s first home minister’s 145th birth anniversary.

“The country cannot forget the unwanted statements given after Pulwama attack. Dirty politics laced with selfishness and arrogance was at its peak when the country was suffering from immense pain,” Modi said.

“The real face of such people has been exposed after the truth was accepted in Parliament of our neighbouring country,” he added.

“Politics done after Pulwama attack shows that people can cross any limit for their political gains. I want to urge such political parties not to indulge in this kind of politics as it affects the morale of our security forces,” he said.

“You should refrain from playing into the hands of anti-national forces, knowingly or unknowingly,” he added.

Congress leader Rahul Gandhi had targeted the BJP in February this year on the first anniversary of the Pulwama attack. Rahul Gandhi had said: “Who benefitted the most from the attack?”. Gandhi wanted to know what came out of the inquiry into the attack.

In light of admission by a minister in prime minister Imran Khan’s cabinet in Pakistan, the Indian Union minister Prakash Javadekar has demanded that Congress “apologize to the country” for “conspiracy theories” and remarks about the incident.

Modi is on a two-day visit to his home state of Gujarat.