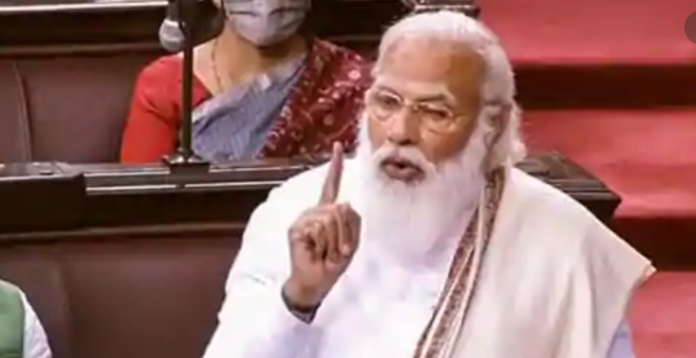 Prime minister Narendra Modi spoke on farm laws and stung his critics as only he could in his Rajya Sabha address on Monday.

“In the last few years, we have witnessed a new category of protestors, “andolan-jeevi,” who can be witnessed in every agitation, be it student protests, lawyer protests or labour protests.

“They sometimes remain behind the curtain or appear in public. This andolanjeevi group can not live without protests and its members continually keep finding ways to stoke protests,” said Modi.

Modi asked the nation to beware of such people and there is a need to identify them. “All these andolanjeevis are parjeeis (parasites,” he added.

Though he didn’t name these andolanjeevis, the image of Yogendra Yadav and Prashant Bhushan, for example, instantly come to mind.

Modi didn’t spare the “professional” hecklers, the rent-a-byte celebrities, who seek to hurt India by meddling in its affair.

“The nation is making progress and we are talking about FDI but I see that a new FDI has come to the fore. We have to protect the nation from this new FDI. We need Foreign Direct Investment but the new FDI is “Foreign Destructive Ideology”, we have to protect ourselves from it.”

A big swipe that Modi took was against his predecessor Manmohan Singh and the Congress party which he represented.

“Manmohan ji is here, I will read his quote – ‘There are other rigidities because of marketing regime set up in the 1930s which prevent our farmers from selling their produce where they get the highest rate of return. It is our intention to remove all those handicaps which come in the way of India realizing its vast potential as one large common market’,” the PM quoted Manmohan Singh as saying, and added: “Manmohan Singh Ji had made his intentions clear, to give farmers the freedom to sell their produce, and have just one market. And we are doing it now. “

He quipped at the Congress: “You should be proud – Manmohan Singh talked about it but Modi is having to do it now. Be proud”.

In his speech Prime Minister Modi said that past government which included Congress and even Sharad Pawar have advocated for farm reforms.

“I was listening to Shri Derek ji. Excellent words were being used, like ‘Freedom of Speech’, ‘Intimidation’, ‘Hounding’. Whilst listening to his words I wondered whether he was talking about Bengal or India. Obviously, throughout the day he sees and listens to that so he must have said the same things mistakenly over here,” the Prime Minister said to rousing laughter in the upper house.

PM Modi similarly turned the page back to Congress’ history as he talked about Rajya Sabha MP Pratap Singh Bajwa’s address to the parliament.

“Bajwa Sahab from Congress was also talking very well this time. He was speaking in such a lengthened way that I thought that in some time he will talk about the Emergency period. I thought in one step from now he will talk about 1984. But he didn’t go there. Anyways Congress disappoints the nation a lot, you also disappointed (in the speech),” PM Modi spoke about the Congress leader’s oration.

The prime minister Modi also made a fervent appeal to protesting farmers to see reason and end their standoff.

“End your protests and we will all sit together and talk. We are ready for talks and I am inviting you again for dialogue from this House…MSP tha, MSP hai aur MSP rahega (Minimum Support Price will remain). No one should spread misinformation…We need to move forward, not backward. We need to give these reforms a chance.”

The number of marginal farmers with small land holdings, he said, had increased since 1971 from 51 per cent to 68 per cent. “Today, there are 86 per cent farmers who have less than two hectares of land. That means 12 crore farmers. Doesn’t the country have any responsibility towards these farm

The Prime Minister emphasised in the Rajya Sabha that India is proud of the contribution of Sikhs.

He stated that the words and blessings of the Guru Sahibs of Sikhism are precious.

This comment becomes relevant at a time when the farmers’ protest is seeing overt and covert participation by pro-Khalistani elements.

(The entire speech of PM Modi could be watched here).