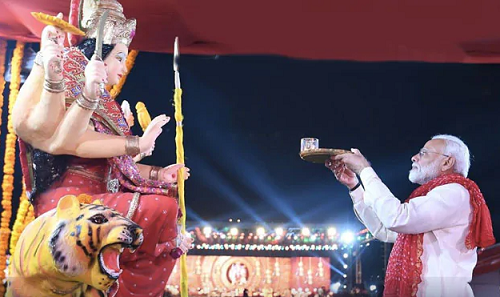 Prime Minister Narendra Modi will celebrate Durga Puja with the people of West Bengal today virtually. On the occasion of Durga Puja, the PM will deliver a message to the people and the Bhartiya Janata Party has made arrangements for that.

Taking to Twitter, PM Modi called Durga Puja an “auspicious occasion, which celebrates the victory of good over evil” and tweeted in Bangla to inform that he will be virtually taking part in Durga Puja.

“Sisters and brothers of West Bengal, tomorrow, on the auspicious day of Maa Durga Pujo’s Mahashashti, I would join the Divine celebrations via video conferencing and shall also be extending my greetings to everyone. Do join the programme live,” he added.

Bengal BJP unit has made special arrangements for the live stream of the PM’s address. TV screens have been put up in all 78,000-election booths across the state.

Prime Minister will also virtually inaugurate a pandal that BJP has set up in Salt Lake in Kolkata at a cultural center run by the Central government.

BJP state vice-president Partap Banerjee informed about various cultural programs, including gigs by folk artists, that have been lined up at EZCC next week. BCCI president Sourav Ganguly’s wife Dona, a reputed Odissi danseuse, and her troupe will be performing at the inauguration ceremony.