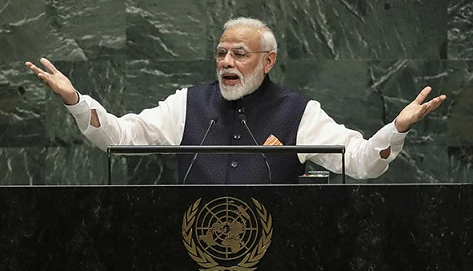 The United Nations General Assembly session will mark its 75th anniversary on September 21 and the ‘highlight’ of this historic event will be the participation of Indian Prime Minister, Narendra Modi, in two debates in the high-level segments.

Indian Permanent Representative to the United Nations, TS Tirumurti on Friday shared this information, as per a report:

This time, the UN General Assembly will be historic and in more than one way. As far as India is concerned, the highlight will be the participation of PM Modi in two debates in the high-level segments starting on Monday,”

Mr. Tirumurti further informed that while the first debate will be general and PM Modi will deliver India’s national statement, the other one will be the high-level plenary meeting to celebrate the 75th anniversary of the United Nations on Monday.  He also added how the address of PM Modi will be one of the major highlights of the event.

The diplomat, while talking about the virtual biodiversity summit which is scheduled for September 30, also informed that our Environment Minister Prakash Javadekar will be participating in the first summit on biodiversity in the UN.

Stressing on the fact that how India, as one of the 10 mega biodiverse countries, has taken a leading role in the field of biodiversity, Tirumurti said,

Apart from this, he also talked about the 25th anniversary of the World Conference on Women which will be organized on October 1 and said Smriti Irani (Women and Child Development Minister) will be attending the event to represent India’s strong commitment towards women empowerment.

The theme of the current UN General Assembly session is ‘The Future We Want; The UN We Need’. The diplomat remarked how the session will be different due to Covid-19.

“World leaders will be delivering their national statements through pre-recorded videos. The hall of the General Assembly will not be empty. One representative per delegation will be allowed in the General Assembly hall. If they wish, they can introduce the video of their respective heads of state or government,” Tirumurti said.