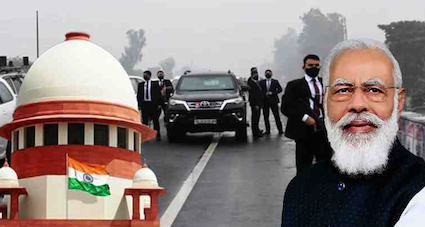 I feel terribly let down by the Supreme Court as a citizen on the matter involving the prime minister Narendra Modi’s security breach in Punjab on January 5.

The Supreme Court did the right thing in holding off the governments in Punjab and Centre from conducting their own probe on count of bias which could creep in; and I also commend them for appointing a probe committee within a week to the incident.

The apex court has also said all the right words on a matter as grave as the security of nation’s chief executive but my disappointment stems from them shying away in fixing a time-frame for the probe.

This suggests that the probe is unlikely to come before Punjab goes to polls on February 14. If the present State dispensation indeed has its hands soiled on the matter, they are unlikely to pay a price for  a motivated compromise of the prime minister’s security.

Everything points towards the complicity.

All this is now public knowledge. It’s a part of the sting operation which India Today has carried and could all be corroborated here.

View the matter in this light and you could rue the tardiness—pardon my expression Your Highness—by the apex court.

Here we have all the telltale signs of a conspiracy.

We know if anything untoward was to happen to the prime minister, the flames of communal violence would’ve engulfed the nation.

Punjab would’ve been closer to the clutches of those dreaming of a Khalistan; the nation as we know being further severed.

It would’ve been a ripe moment for the Islamist forces, eyeing us from our neighbourhood on either flanks, to fish in troubled waters.

And what to say of our unfriendly neighbours, Pakistan and China, entertaining hopes of attacking India from both its flanks?

One such incident could push India back by decades.

It had the seeds to imperil the lives of citizens, the sanctity of our borders.

Such incompetence, if not complicity, deserves the swiftest of retribution.

That’s why we have no less than six chief ministers crying foul in unison and pointing out that PM was within 10km of Pakistan border from where a sniper or a drone could’ve carried out a horrible attack.

Yet, by not putting a time frame, the Supreme Court has extended a lifeline to complicit forces.

Citizens elect its representatives and could hold them accountable every five years.

But they don’t elect its judges and can’t hold them accountable.

All that exists for citizens is the trust in judicial process.

If this trust goes, which door citizens could possibly knock at?