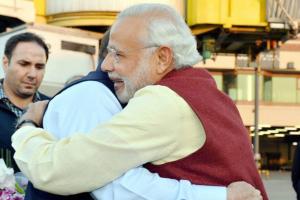 Indian prime minister Narendra Modi’s unscheduled stopover for his counterpart Nawaz Sharif to Pakistan is not symbolic alone. It has a domestic and international substance which would only annoy those who don’t want peace between two combustible nuclear-ed neighbours.

And who don’t want peace? We now know of forces who would like Middle East to be terrorist-infested; that in its second phase could export terror on to north, east and south of Eurasia. Russia, which has grappled with terrorism in Caucasus longer than any other nation; and China which is struggling with Uyghur Muslim in its Xinjiang region; fear such a flood of separatist trouble if Middle East is completely submerged with terrorists.

Pakistan, which has had a hand in creating the first lot of terrorists through its Inter Service Intelligence (ISI) in the 80s to drive out Soviets from Afghanistan (it’s all documented), is now in a historical correction mode. It’s more China than US-centric and has no interest in being the shoulder from which Washington fires its guns. The US drone warfare in Pakistan has lasted for almost a decade now. The tutelage of US for decades has yielded Pakistan nothing but mass killings on its streets and schools and the epitaph of a near-failed state.

Modi, like leader of any sovereign nation, has two compelling narratives: to ensure peace at its borders and to economically grow the country. There is no sense to remain mired in China-Pakistan vs India narrative (which of course is what imperialist forces of divide-and-rule would like) and miss out on all the infrastructural, gas and communications highways presently underway in Eurasia for its integration.

Hostile borders is what allows terrorism to flourish and which is a common fear of Russia, China, India and dare I say, Pakistan. A move to protect Eurasia’s security is what prompted the creation of Shanghai Cooperation Organization (SCO) in 2001. The Asian powers clearly saw the game of North Atlantic Treaty Organization (NATO) to spread to  Asia and wreck the region (e.g Iraq, Libya, Syria etc) so as it never gets integrated and challenge the dominance of West.

Interestingly, both India and Pakistan are to be formally inducted as members of the SCO in 2016. Their cooperation is sought by SCO founders China and Russia who exert a considerable influence on Pakistan and India. Modi’s impromptu visit to Pakistan must be seen in this light. The parley of last few weeks in Paris, Bangkok and Islamabad has been a build-up for this Lahore bonhomie.

That all this has overtaken the preceding acrimony has been most pleasant. Pakistan had submitted three dossiers in the United Nations comprising alleged role of India in subversive activities in Karachi and Balochistan. India had cried foul when China didn’t allow 26/11 perpetrators to be listed as terrorists in UN books. The border skirmishes and killings had scaled up. All this has been too recent.

Economically, India wants its roads to lead deeper into Eurasia rather than be hemmed in by Pakistan and China. The recent signing of Turkmenistan-Afghanistan-Pakistan-India (TAPI) gas pipeline was a sign of changing winds in the Indian subcontinent. Don’t be surprised if decks are also cleared in long-delayed Iran-Pakistan-India gas pipeline in 2016.

Modi would reap the most from this peace harvest. He has realized that domestic opposition would’ve only one stick to beat him up with: to show him as communal and promoter of “intolerance.” This clearly orchestrated Modi-demonizing method flares up before any state elections and is the handiwork of Marxist-Congress-Media-CIA “gang of four” in this country.

Modi’s overture to Pakistan has taken the sting out of poison-tipped arrows of opposition. It would be difficult to portray him as anti-Muslim after such a breezy outreach. They haven’t been able to pin him down on corruption—“intolerance” is the only hammer at their command. These destabilizing forces would now have to come up with something new.

It’s also time not to judge India-Pakistan relations on Kashmir alone. Kashmir would remain insoluble in near future. But Kashmir shouldn’t deny low-hanging fruits to the two neighbours.

The only solution to Kashmir would be to declare it a non-militarized zone just as it exists between North and South Korea. All conflicts would then go to the UN table and both India and Pakistan would be denied an arbitrary stance.

After Modi’s visit to Pakistan, the usual peace-bashers would be up to their tricks. You could hear of clashes at the border, terrorist attacks and compromised NGOs hogging the headlines. Mark them out and the newspapers which promote them. There are the enemies which lie within.