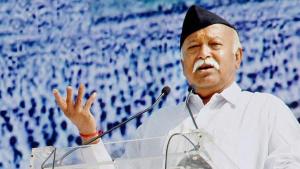 (Facebook has set out 10 tools to check Fake News. A few give-aways are headlines, source, evidence and photos. Indian Express, no surprises here, continues to be the leader of Fake News in Mainstream Media –call it Lutyens’ Media).

On the parameters set out by Facebook, this is clearly a Fake News. RSS chief Mohan Bhagwat never said the “Farmers, small business” are suffering; and even if he thought so, he never addressed it to the government!

Indian Express chose “small business” as the essence of Bhagwat’s speech even though he had some quite explosive opinions on mischief-makers in today’s India: The RSS chief asked for some constitutional provisions of J & K to go; he wanted Rohingyas to be thrown out on security; and he exhorted those involved in cow-protection to keep up their good work and not be dissuaded by sinister coining of word “vigilantism” to make them appear criminal. Pointedly, Bhagwat asked: “Many activists who were peacefully involved in cow protection were attacked and killed. This issue is neither discussed nor being inquired into.” (His entire speech can be watched here).

Yet, Indian Express found merit in giving a Fake Headline to Bhagwat’s speech. They ignored the sumptuous praise which Bhagwat had reserved for Prime Minister Narendra Modi. The evidence of their foul play is the headline in its web-edition: “RSS chief praises Modi”, some 20 hours earlier before it was fabricated for the print edition!

One can understand this anxiety of a mouthpiece of Left ideology to keep harping on India’s economy in view of the forthcoming Gujarat assembly elections. Such assault on India’s economy also finds expression in running down “Bullet Train,” more so in the wake of recent stampede tragedy in Mumbai.

Thus you have a story running down “Bullet Train” in Lutyens’ Media. Today, Express has given big displays to P. Chidambaram, Raj Thackeray and Uddhav Thackeray, so much so that it almost makes up the entire Page 9. Never mind, such set of people not long ago were worrying that speed of our trains haven’t changed since 1971. This sort of ideology was against metro in cities. Remember the outrage on Mumbai-Pune expressway project? It is this expressway which has made Pune so alluring to corporate and IT sectors. Yojana Bhawan had once declared the Maruti Project as a pipedream. Such ideology couldn’t care less that land prices along the Bullet Train would shoot up and bring a great deal of investment, growth and jobs.

Bullet Train as such is not a Fake News in Indian Express but when politicians and media work in tandem, who are we to disbelieve our politicians and Lutyens’ Media are not part of the same ecosystem which is intent on spreading mischief, a softer version of Fake News?

Another such example of acting in concert is on Kancha Ilaiah Shepherd, director of a centre in the Maulana Azad Urdu University in Hyderabad. The man has gone berserk in claiming his life is under threat for writing books such as : “Post-Hindu India, Buffalo Nationalism, Untouchable God” etc. Among his suggestions are to say prayers in English. For the last four months, this ecosystem of mischief and fake news are fuelling each other on Shepherd.  Yesterday it was Indian Express, today it’s Times of India which has splashed his interview in its edit page. No prizes for second guessing that Scroll, Wire etc have long set the agenda rolling.

Now all those who interview Shepherd, don’t ask him some simple questions: “Sir, why you have nothing ever to say about the discrimination and oppression within Muslim communities?” Or “Sir, why don’t you mention the Reservations which the state grants to your oppressed community of Dalit-Bahujan, depriving many meritorious of the upper castes?” Or, “Sir, any views on why the Leftists, whom you support, have zero representation of Dalit-Bahujans in their top hierarchy?”

Such agenda is visible everywhere. Today, in Indian Express we have a full page interview with a Magsaysay award winner outlining the system’s failure. The less said about Magsaysay awards the better for the CIA-Ford Foundation links in its background are unmistakable. Arvind Kejriwal, or Manish Sisodia, would certainly have something to say on it.

Then there are two pages on the plight of manual scavengers in Indian Express. There are many reasons to sympathize with their plight; but every reason to condemn the attempt to link it with Swachh Bharat mission and by inference show it in poor light. Even as the word is pouring in on Swachh Bharat’s success.