Muslims realize how they’ve been used in Bengal: Babul Supriyo 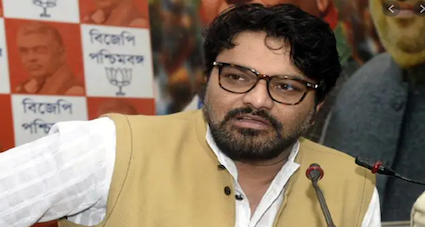 Babul Supriyo, Minister of State for Environment, Forest and Climate Change, says the BJP’s match-winning mantra in cash-strapped West Bengal would be economic development. That, claims Supriyo, is the only way to succeed, the only way to bring all communities on the same page.

Supriyo, who will contest from the Tollygunge neighborhood in the southern fringes of Kolkata, said West Bengal has lived in a state of denial for over four decades.

“Economy will bring everyone together. Bengal needs to change. I do not want to see the whole past in our future, the future of Bengal. Business must grow, jobs must return. The time has come to stop the brain drain from the state,” Supriyo told in an interview.

He said his party is trying their best to unite voters, telling them polarisation will not help. “The gas cylinder which goes to an average home does not have a religious tag on it. We do not discriminate, we want the state to grow. The Muslims, who form a significant block in the state, has finally realised how the Left and Trinamool used them as vote banks.”

Supriyo, who says he is guided toward the right decisions by his bedrock principles and unwavering scruples, regularly gets “what qualifies you” questions in Bengal and often answers the same way. “We’re going to be looking for common ground and things that we can work together on for as many issues as possible.”

Supriyo says politics is important because it helps push good policies that, in turn, permits institutions to function and empower people. “But the TMC has got people hyped on politics by saying if the other side wins, it’ll ruin the state and destroy Bengal forever. TMC must lower the temperature, turn down the volume of bitterness and elevate the public discourse which has become overly coarse. It is vital to prevent society from taking a turn for the worse.”

‘Left Now A Leftover in India’

He reminds people that though he is a singer, a performer, he is a Lok Sabha MP. And that he is not a fly-by-night person. He has won elections and walked into the NDA cabinet. He knows there are chances that Bengal CM Mamata Banerjee could file nominations from Tollygunge (besides her candidature in Nandigram located 150 km from Kolkata) but that has not ruffled him.

Tollygunge is home to Bengali movies and the TMC has a solid grip on the industry. Supriyo says he has seen it all and he is not hassled. “I am not politically untested in Bengal. I am 51 years old and I am aware of the enormous challenges ahead. I am ready for the game,” says Supriyo, his hint is clearly towards the popular election slogan of the ruling Trinamool Congress, Khela Hobe (which translates into There will be a game).

But the BJP does not have a CM candidate in Bengal and Mamata Banerjee has exploited that gap to the hilt? And two polls conducted by television news channels have put TMC ahead of the BJP, right? “We are a party where people are encouraged to aspire, aspire big. We work hard and work for positive results and then leave the rest to the party high command.”

Doesn’t this sound like a Left Front slogan where the Politburo decides for the rest?

Supriyo says he is not worried about Mamata Banerjee’s larger-than-life image and her huge connection with the masses in Bengal. On the contrary, he says there is intense discontent with the TMC, especially in the hinterland.

Supriyo says members of TMC are seen as allies of business tycoons and also the coal mafia in the state. Supriyo says he will need to show voters that he is as serious about pushing business and tackling corruption, almost like the moral cop he plays in Tollywood blockbusters, his regular-guy approach often echoed in his real-life campaign.

“I tell everyone to speak up, and not be afraid. Visit any village in Bengal and you will see a deathly silence among the villagers. They will not talk openly. They live under constant fear of the TMC goons. There are scores of villages in Bengal where development has not reached because the villagers had voted for the BJP. Kolkata is no different. One voice against the party or the leader and will you see its reflection in the city. And then, this very TMC calls BJP a fascist party,” said Supriyo.

Supriyo, whose performance as a playback singer hit the record charts way back in 2000 in Rakesh Roshan’s Kaho Na Pyaar Hai, says he is building a strategy for winning hearts and minds in Bengal. Routinely he appears on social media, explaining his party’s point of view. He also counters what he calls mindless propaganda against the BJP by the TMC. “I know how to unite people. I sing, I talk. People love both.”

No industry, no jobs, only talk

Political cognoscenti in Bengal say it could be anyone’s game in Bengal. Supriyo’s plan is still unknown and he will be closely watched. If he wins and so does his party, the focus will be on reforms and the makeup of the new administration. Supriyo says he is working hard to impress upon the people that BJP seeks development and not appeasement of any community.

“What I do not understand is that here is a state where there is no economic development, no big industries setting up their operations, no jobs for some of the brightest minds and all I hear is that the BJP will come to Bengal and destroy its great institutions and make Hanuman temples.

“They call us outsiders, try to politicise everything. It is not a good sign for a state. Elections come and go but it is only in Bengal it becomes an obsession of the masses. They would blame us for attempting to take over Tollywood when their own ministers control the industry in a vice-like grip.

The National Green Tribunal seeks a boundary at a fairground in Santiniketan and we are blamed for that. Bengal is the only state where cut money is an officially accepted profession.”

Cut money is the underhand fees that politicians charge for securing government funds for projects. The name originates from the ‘cut’ of the total money that government agencies disburse.

Supriyo said the TMC’s narrative is simple: Hate BJP. And the party has been fairly successful in pushing this divisive agenda. The TMC in Bengal does not respect the federal system, they are happy to ignore everything and everyone.

“People in the state are encouraged to ridicule the Prime Minister and other Central ministers. Even filmmakers use saffron flags when they depict hooligans in their movies. It’s a sad narrative. For years, the Left Front pushed a peculiar agenda that the Centre was not helping the state, the TMC – which otherwise hates the Left – has happily borrowed this line. The Centre is often blamed for lack of economic development, the TMC deliberately keeps people in the dark.

“There is lawlessness in Bengal, there are violence and deaths in every election and the TMC and its band of intellectuals are very quiet about it. The TMC’s big debate on outsiders, Bhadralok vs Chotolok (the good vs bad) has not led the state anywhere. They call everyone illiterate, they do not know by doing so, they are actually isolating them from the rest of the country.”

Supriyo says he feels sad because Bengalis are a very progressive race, they have fought for the independence of India and then shaped the nation. Once the Bengal film industry was known for its trailblazing movies, now the entire film industry is sucked into politics and nepotism. One filmmaker criticises the government and the film is shunted out of the halls. TMC wants everyone to fall in line. Else, they won’t exist. “The political narrative has come down to an abysmally low level. Bringing it back to normal levels will be a herculean task. But the BJP will achieve it.”

Its game on for him, his party, and the ruling TMC in Bengal.

(This is a revised piece the writer first penned for MoneyControl).

The repeal of the proposed farm laws has given hope to many, among them the tobacco industry that remains constantly at the crossroads because...

Writers’ Building: A heritage which is victim of Rulers’ neglect in Bengal

Durga Puja is losing its sheen in Bengal: “Where are the orders for idols?”

East Bengal, 45 million fans and all, is in deep mess of its own making