Navneet Kalra saga: Not the best of times for a few who know or knew him 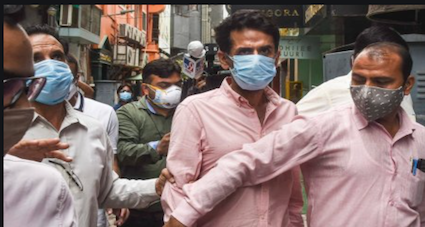 The Enforcement Directorate has registered a case of money-laundering against businessman Navneet Kalra and he has been booked under the Prevention of Money Laundering Act (PMLA).

So, what does the PMLA entail?

First of all, it applies to all of India, including Jammu, Kashmir and Ladakh. This will be worrisome for some of the Lutyen’s Delhi punters who have so far been getting away with dual lives of the sort where Indian Laws did not apply to them because they happened to be Kashmiris. Most especially to an elderly gentleman, who was almost like a slave to The Family for decades, and was unceremoniously cast aside very recently to the extent that even the person he opposed all his life had tears in public for him. truly, being a slave (ghulam) is easy, but the end result is always the same.

Next, it applies across jurisdictions, domestic and international, and since it comes under the Ministry of Finance, also enables it to utilise a variety of tax treaties with other countries. Why is this important? This is important because over the last few decades, the tricks of the trade as utilised by “half-Overseas Citizen of India” or “half-OCI” families, had evolved beyond all logical proportions. Whether it be Indian origin corporates investing in India, cricketer spouses, Bollywood families or law-maker better halves, or even promoters of really old Indian business houses – the OCI is now fair and square in the sights as PMLA goes.

Thirdly, PMLA applies to all beneficiaries and family members who may have in any way benefitted from the proceeds of these fiduciary crimes, and the claims as well as prosecution do not abate even if the main perp dies. Moveable and immovable assets, in India or abroad, are all fair targets. Sure, time is on the side of the perps, but when the ultimate aim is to try to recover and bring back the proceeds of crime to the State, then incarceration after a few months is not the ultimate objective.

Because-nothing hurts the Lootyen’s Looters, or their beneficiaries, more than having to return what they looted. Delhi is full of such persons, who once ruled the roost, and whose massive bungalows or farm-houses as well as lifestyles are reduced to looking for barsati apartments on rent while the proceedings take their course.

MLA is not an Act that you want to fall foul of, especially if you are what is increasingly known as “half OCI” family types. And truth be told, who you know or knew works against you.