Next: Kanhaiya of homosexuals 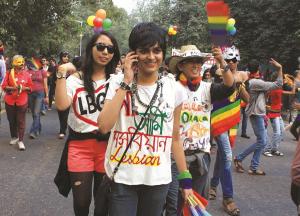 Let’s second guess the agenda of our English mainstream newspapers in next few weeks/months. My vote is: they would find a Kanhaiya of homosexual community and paint the town in LGBT colours. Amartya Sen and Vikram Seth would once again by on front pages and news channels. The human rights activists, the NGOs, some Foundation, Barack Obama or Melinda Gates, the New York Times, would worry about India’s “intolerance” and “freedom of speech.”

Yes, I know you would doubt it could happen. Despite 2.5 million registered homosexuals—there are millions more unaccounted for—homosexuality is a criminal activity in India, punishable under law. But a civil movement for this “repressed” section could never be outlawed. After all, some people in this country could get away with anti-India slogans and still not be found seditious.

Let’s first deal with the historical aspect of homosexuality in India before you and I raise the flag (pun intended). Hinduism is rather ambivalent on it (sigh! you lose a point here, the “tolerant” brigade). Rigveda says Vikriti Evam Prakriti (implying what is unnatural is also natural). Manusmriti. Kama Sutra devote enough space on it.

This was till the 19th century arrived. The British Empire now was all over India and England frowned on homosexuality. As a result, when India got its Indian Penal Code in 1860, Lord Macaulay inserted section 377 which brought in the concept of “sexual offence against the order of nature.” And so it has remained.

It would interest our “liberal” intellectuals to know that homosexuality in West, which they quote as a divine word, was illegal till early 1970s. The American Psychiatric Association (APA) declassified homosexuality as a mental disorder for the first time in 1973. The World Health Organization gave it a clean chit in 1990.

It all began when gay activists led a virulent protest against an APA convention in San Francisco in 1970. It was no different next year, supported as homosexual lobby was by very powerful and rich segments of the society. In 1973, APA removed homosexuality from the list of mental illness—though it didn’t go as far as to declare it normal.

It’s important to remember that there wasn’t any scientific breakthrough which suddenly made the world realize that homosexuals are normal. The health bodies simply caved in to raging fuss outside their offices.

IT WAS A POLITICAL DECISION AND THERE WAS NO SCIENTIFIC BASIS FOR IT.

Indeed, till it got away, homosexuality came under Paraphilia group which included sexual activity that is considered unnatural in psychology and sexology. It included pedopholia, sadism, masochism, sexual fetishness, exhibitionism, voyeurism, necrophilia and nymphomania.

Let’s deal with the scientific aspect of homosexuality. Wikipedia says that same sex attractions, feelings and behaviour are normal and “positive variations of human sexuality.”

By that token, pedophilia and incest should also be seen as “positive variations of human sexuality.” But the world is against pedophilia. Yes, I know you would say it’s not between adults and possibly not consensual and children must be saved. But if “positive variations of human sexuality” is the scientific word, than you can’t be jailed for entertaining pedophilic thoughts.

Who decides whether it’s right or wrong? Is the right-or-wrong definition absolute or arbitrary? One could only follow the convention—and thus only religious position could be the arbitrator. I have spoken about Hinduism. Let’s see what Christianity says: Since the fall, man has lost his original true nature and that his current fallen nature is the cause of his suffering…and it must reclaim his or her original nature.”

What is Sin? The official definition is “Missing the target or failing to act according to one’s true potential.” In other words, transgression of religious and moral law, especially when deliberate.

Homosexuals like to say they were born that way. So could be the opinion of pedophiles. It’s not a choice but a condition. A society which aims to protect children from pedophiles also give away these children to proven homosexuals who are now a couple and could adopt them. This is the same society which considers it to be a felony to possess naked, voyeuristic photos of children on your computer—but it has no compunction in giving away young children to homosexual couples. Pathetic logic!

If this “liberal, tolerant brigade” in India is upset that I am advocating pedophile, let me quote from their own scripture, i.e from the West. Frederic Mitterand, former French minister and nephew of the late President of France, Francois Mitterand, wrote a book called “The Bad Life” in which he confesses using boys in Thai brothels. At the time of the release of the book, MItterand was hailed for his honesty.  France, as we know, has many homosexual politicians.

Richard Dawkins, world’s most famous atheist, has defended mild pedophilia. He says it does not cause lasting harm. There are animal brothels in Germany where sex is allowed with animals as a matter of “lifestyle choice.”

My reason for bringing in pedeophile is to contrast it with the absurdity of logic on homosexuality. I am neither a homosexual nor a pedophile. Nor do I approve of them. I am happily married for over two decades with two adult daughters. I don’t mind homosexuals but I don’t like the campaign to accept and applaud them. As I don’t expect them to give me a standing ovation for my preferences. Each to his/her own. If I disagree, don’t term it homophobia.

Majority of us don’t feel homosexuality is normal or positive. Most don’t say it in open to avoid trouble. Meanwhile homosexuals are portrayed as some kind of persecuted prisoners of conscience by the corporate media.

I like gender differentiation. I am not one of those “liberals” who find it sexist when you address a woman as “lady.” I don’t like when I am told men are not supposed to look masculine and females feminine. Not when it’s fashionable to be sissy in appearance—say such as Barack Obama and John Kerry. Gender differences in men and women give life its’ spice.

You don’t like gender differentiation? Then you are welcome to hurt your eyes in darkness which doesn’t make any differentiation. Why then you have pairfigure skating or mixed doubles with men and women as partners? In a real world, to a real child, traditional father and mother provide the necessary emotional nurturing.

The fact is, there is a multi-billion dollar industry in West which caters to sexually dysfunctional people. It’s a tool in West’s kit of destruction: like you have “tolerance,” “human rights” and “freedom of speech.” Like other tools, it’s used to spread unrest in stable societies. There, the God has been declared dead and all opinions on right and wrong dismissed as cultural. Thus they can bend, adapt and repackage the ideological agenda of the day. So killing unborn babies by the millions is right. Giving up kids to the “same sex couple” is right. Homosexuality is right. Animal sex is right.

The issue is they want their moral standards of the day to be followed by other countries, such as India and Russia, who have different sensibility on the subject. This tool is very conveniently spread by their agents (read media, NGOs, Foundations) in sovereign nations. The intended effect is the same as the one of “intolerance” and “freedom of speech” in India.

So I expect our English newspapers to rake it up soon. Some homosexual persecution or death and the streets of our Capital will have organized marches and media coverage of up to one month or more—like it’s happened to Kanhaiya.

Even though this issue logically can’t be put in front of Modi government’s door—since it’s a matter of judicial action—you could be sure a way would be found to portray the present government as “intolerant.”

The search for Kanhaiya among homosexuals must have already begun.