No crop burning, no Diwali, no heavy traffic: Still Delhi is most polluted in world!!! 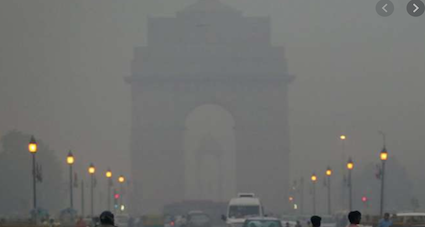 This is the Air Quality Index in and around Delhi right now (image below). There are no crops being burnt. Diwali is not happening. Traffic on the otherwise busy roads near my home off Moolchand in Delhi is eerily low. The assortment of nightclubs are also silent. The only noise I can hear is the occasional rumble of a Delhi Metro train on the Violet Line.

And then there is the stink in the air of what is probably the exhaust from badly maintained generators using high sulphur furnace oil or some weird combination of adulterated bunker oil fuels to offset the high cost of diesel. You see, I live close to the Moolchand DDA Commercial Complex in Defence Colony, New Delhi, which houses over a dozen Public Sector Banks, and an equal or higher number of Government offices of all sorts, along with half a dozen eateries. All of them need huge amounts of electricity and today was a 10am-to-6pm power cut for maintenance. There are  over 30 huge generators on the rooftop of just one building near my home, all at almost the same level, and with the winds moving in my direction – even my fingers now smell of engine oil.

As a further result, we were subjected to a huge roar of noisy fume spewing generators all through the day, and a cool night means that the exhaust gases full of partially burnt fuels have simply not escaped, but been trapped by the cold air falling from the skies, to return to sender in a manner of speaking. Multiply this with 1000s of rooftop generator ensembles, and you have a good idea of why despite CNG for public transport and every possible rule for people otherwise, what we face is a losing battle as summer approaches with the promise of even more power cuts.

A little bit of asking around, and it transpires that despite much ado, there are absolutely no implemented rules about generators mounted on roof tops. The amusing reason given is that the hot exhaust will go up into the sky, presumably straight to the troposphere, but the truth is that badly combusted fuel in ancient reciprocal generators running on some jugaad collection of diesel engines salvaged from old trucks and buses, will not burn out completely and therefore simply hang around before dropping down at night when it gets cooler. This is what things look like – but it doesn’t look like there is any adherence.

The same rooftops are singularly devoid of any form of solar panels, incidentally, nor do the offices below believe in double glazed glass windows or better insulation. And the usage of diesel generators has been allowed again. We are doomed. Those diesel gensets will help us remain first, it seems.

Riding trains and buses, spending time at bus terminals and railway stations, are one way to figure out what the Real Bharat is doing...