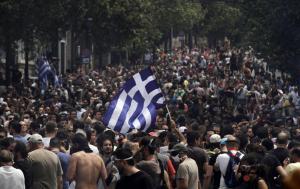 Chances are you would hog tomorrow’s newspaper. And cancel the Boys Night Out today in order to sit in front of telly. Don’t bother and have fun. Greece is unlikely to exit European Union (EU).

On paper, a climactic clash has pitted two non-reconcilable factions in a gridlock. Greece won’t pay its debts. Its’ troika of creditors, EU, ECB and IMF won’t let go the bone in its teeth. But it is all fixed. Wager a bet if you can. Seriously. Greece is going nowhere out of EU. Come Sunday and that big prized fight which the rulers, media and speculators are anticipating, would prove to be a dud.

If Greece was to go, Italy would follow next. Then Portugal. Then Spain. Soon enough, Europe’s jaw would hang loose. They would be easy pickings for China and Russia. Above all, the $900 billion dollar NATO would come unstuck. It’s an unthinkable scenario. US’ hegemony will unravel in less than a decade. A few billion dollars is a dirt cheap price to pay for the overall health of the emperor.

That’s why you saw Greek prime minister Alexis Tsipras appear smiling in a meeting with its creditors on Monday. He came with no plan to save his country. It sent Greece’s creditors in a rage. But don’t be fooled. These creditors and the powerful troika who loom up as monsters would hee-haw the moment US cracks the whip.

Sure the creditors are powerful. The ones in United States bought Greek sovereign debt dirt cheap that promises profits several times over. The select few of Europe like sharks have tasted blood in the pool. They can sense the opportunity to buy off Greek ports, islands, water companies and other state assets. But they would have to back-off. They can’t stare down the master. Tsipras would fall in line too. He would never underestimate US’ ability to overthrow a government or simply take the assassination route.

The Greek “debt crisis” is an orchestrated effort. According to Paul Craig Roberts, the former US assistant secretary of treasury, the ECB was printing 60 billion euros per month at any time during the “crisis.” Ensuring Greece’s solvency was a child’s play. All they could have done was to purchase the Greek debt from creditors’ banks. This solution in plain view was ignored.

This manipulated “debt crisis” was a boon for Western speculators on euro and gambling with derivative bets on soverign debt. Each successive crisis became cover for an attack on oil or other commodities. “The rigging and manipulation of markets can be hidden by pointing fingers at the latest crisis,” says Roberts.

In his book, “The Failure of Laissez Faire Capitalism,” Roberts explains: “Greek `debt crisis’ served two other purposes. One was to get rid of the practice of restructuring a country’s debt by writing it down to a level the country could afford and establish the new principle that people are responsible for the mistakes of over-lending creditors. The write-down thus doesn’t occur on the balance sheet of the creditors’ but instead becomes a write-down of pensions, social services and employment. This, too, is a process of looting.

“The other purpose, as Jean-Claude Trichet, the previous head of the European Central Bank, made explicitly clear was to further reduce the sovereignty of member states of the EU by transferring authority over fiscal policy (tax and spend decisions) from national governments to the EU in Brussels.” US, like it does at home, want to centralize political power in Europe.

If this theory is right, next such bail-outs would occur for Italy and Spain. EU would get stronger, so would NATO and a whole lot of European nations would have transferred their sovereignty into the hands of European masters sitting in Brussels.

With austerity gone, Greeks would feel vindicated for taking a tough stance on referendum. But the bigger damage would have happened somewhere else. NATO’s military heat on Russia would only get more intense. The world would tether on the edge.