No Mr. Omar Abdullah, nation would back Tathagata Roy on Kashmir 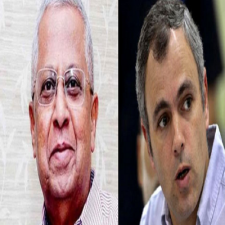 I woke up today to Omar Abdullah’s tweet against Meghalaya governor Tathagata Roy who called for economic boycott of Kashmir and Kashmiris. Abdullah called Roy as “bigot” and asked: “Why don’t you stop using our rivers to generate your electricity as well?”

Mr Abdullah doesn’t know that if India doesn’t use the state’s rivers, the state would be flooded to the extent that his own palatial home would become a shikara. He also needs be reminded that Kashmir Valley gets almost 10 per cent of entire subsidies which the Centre extends to rest of the states—this when Kashmir has only one per cent of country’s population. A Kashmiri gets 8 times more money than citizens of other states. So when everything has failed—talks, negotiations, appeasement, goodwill—perhaps an economic boycott of Valley, as mentioned by Roy, is worth pursuing.

It’s also as good a time as any to remind Omar Abdullah, as well as Mehbooba Mufti,  his Siamese twin, how such “humane” concern of theirs don’t extend to two bigger and larger parts of the state, Jammu and Ladakh.

There is a crying need to trifurcate the state of Jammu and Kashmir into Jammu, Ladakh and Kashmir, tearing apart the 1954 Presidential decree which prohibits the reduction or increase in the present boundaries of the state.

Article 370 and 35A were introduced to protect the “cultural integrity” of the state which has only meant that cultural tyranny of the Valley as against the largely Hindu and Buddhist ethos of Jammu and Ladakh which are suffering under its yoke.

Jammu and Ladakh together have almost 85 per cent of the state’s area, compared to 15 per cent of Kashmir but have no say in its affairs and have consistently suffered under the discriminatory practices of the state government which is dominated by politicians of the Valley.

Despite its size, Jammu has only 37 assembly seats to Kashmir’s 46 and Ladakh only 4 (with 24 seats designed for the area under the control of Pakistan and China).  Even in Lok Sabha, Jammu has two seats compared to 3 in the Kashmir Valley with one belonging to Ladakh.

At the time of accession to India in 1947, Jammu province had six districts while Kashmir had just three districts: Srinagar, Anantnag and Baramulla. In 1975, Sheikh Abdullah of the National Conference created three additional districts of Kupwara, Pulwama (yes the same Pulwama) and Budgam in Kashmir. In 2007, Ghulab Nabi Azad of the Congress-led government in one stroke of pen, even when there was no demand for it within the Valley, increased the districts in Kashmir from 6 to 10.

This flew in the face of promise Congress had made on assembly election eve in 2002 to implement the Wazir Commission report of 1984 which had recommended 10 districts for Jammu and 7 for Kashmir.

Jammu has suffered not just on this count. Almost 90 per cent of the gazette posts in Kashmir-controlled J & K Public Service Commission (JKPSC) is filled by Kashmiri Muslims: Jammu gets only crumbs of around 10 per cent of its share.

Around 2 lakh Hindu-Sikh refugees from Pakistan are in Jammu since their migration from Pakistan’s adjoining Sialkot area in 1947. They don’t have right to property, education, government jobs, bank loans or right to vote. They are Indian nationals but not citizens of the state. As for women, if anyone marries a non-permanent resident of the state, her husband and children are persona non grata in the state—in other words, refugees in the state.

All this has stemmed from the draconian definition of “permanent residents” under despicable 35A Article.

In the name of protecting the “cultural identity” of Jammu & Kashmir, all Article 35A has done is to obliterate the identity and aspirations of Jammu, and Ladakh, who want to integrate with the rest of India for their economic, social and political betterment.

Jammu is traumatized by the way the Rohingya Muslims are being infiltrated into their region in the name of human rights, backed by India’s corrupt media and academia who suffer no such pangs when Kashmiri Pandits in lakhs were driven out of the Valley, refugees in their own land.

Jammu has also seen a steady influx of Kashmiri Muslims descend on their region in tens of thousands and they rightly fear it’s intended to change its demography—even as there is almost no migration from Jammu, or Ladakh, to Kashmir Valley. The Valley makes it almost impossible for Kashmiri Pandits, West Pakistan refugees or retired soldiers to settle in their region.

35A Article is such an important weapon in the hands of political goons of the valley that in 2017, on August 9, Mehbooba Mufti went over to Farooq Abdullah’s residence to ensure a joint stand on retention of 35A Article, never mind that they project themselves as arch rivals. The two parties, PDP and NC, had also sought the support of Congress in forming the government in J & K after BJP pulled the plug on state government in 2018. It’s another matter that governor Satya Pal Malik dissolved the assembly and imposed the President’s Rule.

Article 35A is not part of the main Constitution, it’s only an appendix, and was inserted by Pt. Jawaharlal Nehru who bypassed the Parliament and took the route of a Presidential decree on May 14, 1954.

Thus in the name of safeguarding the “cultural identity” of the state, there is a systematic persecution of state’s minorities such as Dogras, the Pandits, the Gujjar-Bakerwals, the Sikhs and the Ladakhis. In recent times, there were attempts to change the name of Bahu Fort in Jammu to Shahbad. Further, posts are being created to teach Kashmiri language in Jammu colleges while none for Dogri, Pahari or Gojri is even proposed.