No one cries for Mahadalits now as in Hathras: Is it because it hurts ‘Muslim-Dalit Unity’ narrative? 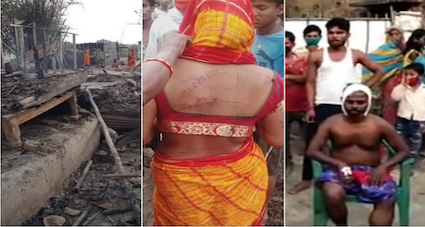 50 houses of Mahadalits, who in the caste heirarchy are viewed lower than Dalits, were burnt down by an Islamist-Jihadi mob in Niyamatpur Majhwa village of Bihar’s Purnia district on May 19.

Aged were pulled out of hair and thrashed; pregnant women were kicked around; children smashed on walls as if a poster. One person died. A Hindu temple was razed to ground. It was one of the most barbaric acts against a community seen in recent times.

Importantly, Mahadalits were at the receiving end. Yes, the same set of unfortunates who receive hours on national television, and front page anchors in Lutyens Media. The same Dalits who caused the “Hathras Outrage” among our Rahul and Priyanka Gandhi; among Yogendra Yadavs and Bheem Army, ostensibly a vanguard for Dalits in northern India. The same “lower-caste” who are splashed on New York Times and BBC as an image of regressive India.

Yet, this Majhwa village incident has been blanked out by the “secularists” and our “Left-Liberals!” There was also no outcry that chief minister Nitish Kumar must resign. Why? Because it was a mob of 150-200 Muslims who had carried out the murderous attack. The minority who must not be seen as doing anything wrong in public consciousness.

Once the Vishva Hindu Parishad (VHP) and Bharatiya Janata Party (BJP) leaders visited the site and cried their lungs out, the Lutyens Media made apology of a coverage of the incident. And the blatant attempt was to whitewash the role of Islamist Jihadis.

A week later, this is what Indian Express wrote, having spoken to one Mohammad Nizam, a sarpanch of Khapra Panchayat: “There is no tension between Muslims and the Dalit community. The dispute is between one or two Muslim families and one or two Mahadalit families.”

Mark: The person they chose to spoke to was not amongst the Mahadalits at the receiving end. It didn’t cross their mind that the two persons detained for murder by police were one Mohd Sakir and Mohd Ibrahim.

Now hear this out: Purnia, and Kishanganj in Bihar border Uttar Dinajpur in West Bengal and is generally called mini-Pakistan. (The same Dinajpur where the SHO of Kishanganj P.S from Bihar was lynched to death in the days of Bengal polls).  The Muslim population in this region is above 75 per cent. Dalits have been at the receiving end for long. Less than a month ago, on April 24, there was also another instance of Dalit houses being burnt in the area. It’s routine. The local MLA? Well he is Sayed Ruknuddin who represents Asaduddin Owaisi’s AIMIM party.

An attempt is being made to portray it as land dispute. The funny thing is, the razed houses stood on a land owned by the Bihar government. A VHP leader has been quoted that a sum of Rs 50 lakhs was provided to culprits. A victim is quoted: “The primary reason behind these continuous attacks in the hate and grudges these Muslims are holding against us. They consider us untouchables and look down upon us…It’s the government’s land we are staying on. If the government doesn’t have a problem, what problem do they have?”.

It serves these “secularists” and “Left-Liberals” to build up “Dalit-Muslim Unity.” Such incidents, as in Majhuwa, hurts the narrative. All their attempt is to wean Dalits away from majority Hindus. To bring India to a halt if it’s one from upper-caste who has done any outrage against the Dalits. But when Muslims are involved, no effort is left unattended to bury the event, failing which to show it as a “land-dispute” between “one-two families.” Dalit-Muslim Unity must be cast in stone even when the reality is in complete contrast.

The truth is illegal Bangladeshis are busy picking up Indian land in these regions by their sheer numbers and arsenals to carry out violence. These incidents are buried by Lutyens Media and hence keep occurring again and again. Innocents, hapless are destroyed, raped and killed. But not one tear is shed by our champions of “dignity of lives” and “democracy.”