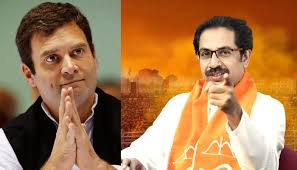 How difficult it is to visualize that tens of thousands of Mumbaikars are staying put in front of Matoshree and asking its most famous resident, Uddhav Thackeray, how would he find peace with Gandhi’s Congress which detests one of their “patriots” to the bone?

Or to imagine that Delhites are converging on the gates of 12 Tughlaq Lane and demanding from Rahul Gandhi why their alliance with Shiv Sena would not be akin to murdering Mahatma Gandhi again, the surname they have reaped for decades of power and legitimacy?

Gandhis bolt at the name of “Nathuram Godse”, like they did twice to BJP MP Pragya Thakur in recent months, and treat it as a trump card in shaping their election fortunes, shouting from every platform or parapet, the quintessential good in the fight against the evil, the chosen heir to Mahatma’s message of “ahimsa” and “peace”.

You could trust Uddhav Thackeray would use the backdoors of Matoshree and Rahul Gandhi would disappear to Bangkok on being shown the past news clippings where Shiv Sena hailed Godse as a patriot who couldn’t reconcile himself to the Partition and the subsequent killing of thousands of Hindus.

Sample these words from Saamna, the mouthpiece of Shiv Sena, as reported by Business Standard on January 30, 2013, the very day when the nation mourns the death anniversary of the “father of nation”:

“Pandit Nathuram Godse had not come from Italy (like Sonia Gandhi did? My inference), instead was a staunch patriot. His blood was boiling over Hindustan being divided and the killing of lakhs of Hindus during the Partition.” This Saamna editorial even defended Godse being mentioned in the souvenir of a Marathi literary meet.

It wasn’t a one-off incident or a case of Shiv Sena being misquoted. The DNA reported another editorial in Saamna, three years earlier, when the Shiv Sena mouthpiece went lyrical over Godse: “He always stood for united India. Is it anti-national to harbour such feelings? He was a real patriot.”

Is it imagination running riot if the voters were to think that next to be toppled from their pedestal would be two idols of Shiv Sena whom they swear by in every minute of their existence: Veer Savarkar and Maharaja Chattrapati Shivaji? After all Congress, at least in the case of Savarkar, has never hidden their abhorrence for the founder of Hindutva ideology.

Now that the unholy alliance between the two parties, along with NCP, has taken shape in Maharashtra, trampling democracy and choice of millions of voters, Shiv Sena has agreed to “common minimum programme” and adherence to “secularism.” Shouldn’t the voters descend on Matoshree with an Indian Express newspaper clipping of 2015 when Shiv Sena insisted on removal of word “secular” from Indian constitution? Shouldn’t Sanjay Raut be shown his words that “secular” and “socialist” need be deleted permanently (from the Constitution)?

Such is the chicanery of charlatans. Their foot soldiers Lutyens Media would never rake up these instances and confront the two parties. The interest of voters is the last thing on their mind. No thought would be spared for millions who gave a majority to the BJP-Shiv Sena pre-poll alliance. No logical query would be put forward: If BJP had agreed to sharing the CM with Shiv Sena, why the latter hadn’t reacted when BJP was crying hoarse that Devendra Fadnavis would be the Chief Minister and when such posters were being put up on every wall weeks in advance?

But expecting Lutyens Media to be honest is hoping wolves would give up carcass.  That’s why it’s up to us citizens to confront Thackerays and Gandhis every living minute of this alliance and seek if their ideology has been nothing but a key to power, what if it robs the voters of their mandate.