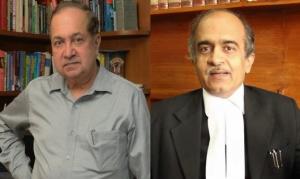 English mainstream media is out of breath on the threat of Official Secrets Act being invoked against The Hindu and ANI, and lawyer Prashant Bhushan on Rafale. Two main arguments have been put forward:

Both analogies are fake as I detail below:

Unlike the Rafale papers, Bofors wasn’t a “scoop” by Indian newspapers. Wikipedia says: “In May 1986, a broadcast by a Swedish radio station revealed that bribes of Rs 60 crore had been paid by Bofors to Indian politicians, members of the Congress party and bureaucrats. This was picked by a young journalist from The Hindu, Chitra Subramaniam, who happened to be in Sweden at that time, covering another story.”

Between 1986-1987, as Bofors gathered fire, VP Singh had been shuttled from the finance to defence ministry. As a finance minister, he had earned country’s respect. He had reduced gold smuggling by offering police a portion of the recovery. Enforcement Directorate was bestowed with extraordinary powers. Regulation on business was eased; tax fraudsters were dealt with severely.

But then VP Singh made Dhirubhai Ambani and Amitabh Bachchan his target. Wikipedia says Rajiv Gandhi had to sack him for he had gone after industrialists who had supported Congress financially in the past. However, such was Singh’s popularity that only a sideways move seemed to have been possible – to the Defence Ministry (in January 1987).

VP Singh was hurt and ready for revenge. He began probing the shady world of defence procurement and murky deals. Bofors scandal had already broken out (as mentioned earlier in this report). VP Singh dug deeper. The word was out that Singh now had critical information on the Bofors scandal (memory of this might have led to Rahul Gandhi’s fabrication on ex-Defence Minister Manohar Parrikkar having critical files on Rafale with him). A jittery Rajiv Gandhi dismissed VP Singh from the Cabinet.

Now you see why N. Ram and The Hindu, and the Indian Express, are lying about the Bofors equivalence on the Officials Secrets Act. Could Congress have afforded to slap Officials Secrets Act on VP Singh? Could they have tested the current of hostile waters with both feet???

On Rafale pleas in Supreme Court on Wednesday, Our English mainstream media has reported with glee that Supreme Court snubbed Advocate General KK Venugopal on his suggestion that “Defence deals are not administrative deals and should be out of purview of Supreme Court.” You wouldn’t have read Venugopal’s opinion was with a rider: Provided the petitioners are willing to name the source…else it is just an attempt to destabilize the country.

The fact is under Official Secrets Act, a person could be jailed up to 14 years even if he or she has unintentionally endangered the security of the state. By bringing out the pricing of Rafale, the Hindu has opened itself to the charge of arming our enemies with information critical to India’s unity and integrity.

Shekhar Gupta, who has lost his sheen as an artificial fragrance would under the harsh sun, has tweeted his outrage on the threat of Official Secrets Act against N. Ram and others.  Journos like him have no qualms when defence analyst Abhijit Iyer-Mitra is jailed for 43 days in Odisha for his “distasteful remark.” Or when Mahesh Vikram Hegde of Postcard News was incarcerated for over a fortnight by Congress government in Karnataka last year. Did you Mr Gupta, spring to defence of your fraternity, if not moved by your personal conscience than at least in your role as (worthless) head of (worthless) Editors’ Guild?

And if other journalists could be put behind bars for contravention of law, what’s so sanctimonious about a few chosen one? Should laws be equal or discriminatory? Is it separate for commoners from the powerful?

If journos like Shekhar Gupta could tell us of their stand when Rajiv Gandhi as prime minister forwarded a bill to curb press freedom (yeah, Emergency wasn’t just one-off) in mid-80s? Is it a fact that Gandhi was moved into such a draconian action after journalists reported that his party delegates preferred to visit prostitutes in the redlight area of Kamathipura ahead of Congress centenary celebrations in Mumbai in 1985?

This is as good a moment as any to ask Shekhar Gupta and you-know-who-all journos what they make of obfuscation and manipulation of English mainstream media. For instance in today’s edition (March 7, 2019), Indian Express has omitted any mention of Prime Minister Narendra Modi asking the Karnataka government of list of loan-waivers beneficiaries—or why the Rs 6,000 benefit scheme to farmers from the Central government isn’t being disbursed in the state. Instead, Indian Express has published the most inane comments of Modi—“fight against corruption, I-am-a-guard”—ostensibly to ensure readers don’t find it worth a read.

Or let’s look at Indian Express, and all other newspapers, who reported of a Pakistani minister sacked for his anti-Hindu comment recently. All the Indian English mainstream media highlighted it big, as if proud of Pakistan’s morality and just stance. Nobody cared to inform its readers what were the offensive anti-Hindu comments of the bigoted minister in the first place. (In case curious, you could hear his real offensive comments here).

No English mainstream media is now mentioning Abhinandan. The only relevance nation’s hero has for them is if he is completely kept out of sight and mind. Contrast this with an Akhlaq or a Pehlu and you would have your answer. A nation divided is better for them than a nation united.