Ola Scooter makes me believe our generation hasn’t failed the one next! 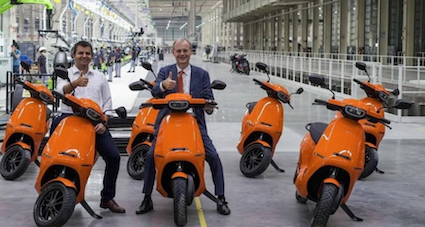 The first time most people from a generation that saw New India emerge bought a two wheeler – they waited a decade or two, and were still treated like dirt. All excuses about “licence raj” were so much hogwash when the manufacturers themselves perpetuated this agony.

Yesterday I visited the Ola Campus, as a prospective customer of their new battery scooter, to take a look for myself on whether things had changed over the decades or not. Having moved out of motoring media more than two decades ago, this visit was purely to look closely at the scooter for myself, as well as for those who still read me.

There has been enough coverage on this scooter from the modern motoring media. Let me tell you what I found most interesting – a five hole rim, broad tyres of equal size front and rear, and elements of safety and over-engineering in design that could only have come from European requirements. The cargo space, now expanded to take two helmets, was originally designed to fit a case of beer or two.

Holland can not do without beer. And Holland builds everything to last. A long time.

I am willing to place a considered opinion here that this scooter has been built to last – and not only because seafarers like me have, for generations now, worked on similar materials as used in the body of this scooter – for lifeboats on ships.

Nothing is built to face worse conditions than lifeboats. And nobody builds boats for rough and bad weather better than the Dutch. And the Ola has Dutch ancestry, in case readers were not aware, which is not just shown in this high-visibility the orange colour. This was my tweet after visiting the Ola Campus.

The Ola Scooter and the people at Ola, as well as the gentle pet and security dogs present all over their campus, all Indian – give me reason to believe that our generation has not failed the next generation. There are enough from my generation who were of the opinion that things had not improved – well, this two-wheeler is an example that things have improved.

This was the message I got by going walkabout at the Ola Campus and listening in while I ate my pork pepperoni on paratha and palak chaat with nimbu-soda.

“The Ola Scooter is one way of telling that generation, the one that enabled the pillars on which those who believe in the India story, that their dreams and aspirations shall be met. Despite resistance from the same OATS eating people who tried their level best to stifle those dreams. They may have OATS for breakfast. The children and grandchildren of the generation that suffered the OATS eaters, shall eat Indian food – brought to their doorsteps from Indian farmers, on Indian vehicles using Indian electricity.

Yes, there are delays – the whole world is going through a supply chain nightmare largely due to the twin effects of the Pandemic as well as Climate Change. Ships get delayed, containers fall into the sea, freight rates have gone through the roof. Floods disrupt vendor outputs. We at Ola continue to persevere.

But Ola shall persevere and Ola shall overcome, and you, my friends, children and grand-children of those stalwarts who had to suffer the misanthropy of the OATS eaters, shall ride home in something that you shall be proud of. Just like the app-based taxi business which created opportunities for drivers as well as customers, and brought in a more equitable use of national resources, the electric two-wheeler shall also not be denied its place under the Indian sun – and the world after that.

Yes, we have taken advances – and guarantee a full and fair refund for those who wish to withdraw. As a potential customer before anything else, I have been through this personally.

For those who continue to have faith in the dreams of our parents and grandparents – we at Ola assure you that we are trying our best. “

We dare to live the New India dream. Despite delays, despite talk-downs from OATS eaters, we have only this to say – we are proud to eat dal, roti, sabzi – but we shall ride the global best in battery two-wheelers, made here in India, despite delays.

And despite the cynical talk-downs by those who had the opportunity to wean New India off fossil fuels for decades, but did not do so.

Why is the #prepaid #petrolmedia up in arms, in a rare show of unity, against the micro-mobility and mass app-cab aggregator, ostensibly on behalf...