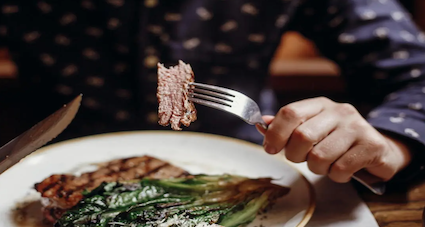 I’m married into a family of hard-core vegetarian-at-home type Indians from the South. Over time, many other friends and family have also turned vegetarian, or vegan, or variants thereof. Fair enough, and for me, nothing works better than a pure veg restaurant when eating out. Especially when travelling.

When the “where or what shall we eat” starts, I always say “veg”.

Many of them use eating out as an opportunity to eat non-veg food. My contribution here that it must also serve pork is met with horror, usually, or with the beef challenge. The rest kind of sulk and come along. If pork is not on the menu, then I make it a point to order veg when out with them, regardless – and have no issues with anything.

Personally, I like to eat meat where I can identify the bone it was attached to, also. Otherwise, veg, then I sit back and observe.

The best are the beef lot, unaware that they are being served random bits and pieces of a usually over-aged buffalo, quite often served high and soaked in masalas as well as pepper. Getting a proper steak from a male steer that was free-range is close to impossible in India, unless it was frozen and sent by reefer across a couple of oceans, at huge cost.

Pork is easier. There is a piggy resurgence in India, domesticated as well as wild boar, and spare ribs are fairly easy to find of late.

And then the food arrives. As also arrives, very often, the Caste Superiority thing. Again, I am very much not a Brahmin, many on the table are, and seating by accident of birth is often the first point of inflection. I have learnt to ignore the subtle and not-so-subtle ones, and sometimes give it back by saying that, “hey, I am also a Brahmin, by penetration”.

But then when they try to pull it off on some scrawny youngster, usually from the Eastern or Coastal parts of India (they never have the guts to pull their stunts on local Goans or North-East persons, is another observation), this gets my goat. Or pig.

There is a category of Indians I know, often foreign returned, even if it was just a few trips to Thailand or somewhere, who will always try to finger hotel/restaurant staff in India on pretty much everything BUT will be as meek as lambs when abroad. It is even more evident when the perps are what I call the beige/silver Camry/Accord blue rubber slippers/bargain jeans blue light at Walmart/CostCo sort.

Am wondering if there is a term/name for them?

(Nowadays, hotel/restaurant staff in India also give it right back, by the way, many have worked abroad, and more power to them.)