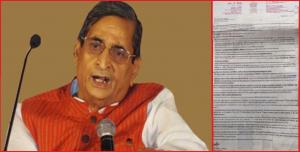 In a letter written to Venkaiah Naidu, Chairman, Rajya Sabha, published as an advertisement in newspapers on Wednesday, Sinha has accused Indian Express of “unethical journalism…in the name of freedom of the press.”

Indian Express had alleged that Sinha was “illegally associated with (a) an offshore company, viz SIS Asia Pacific Holding Limited (SAPHL), incorporated in Malta; (b) that his nomination papers of Rajya Sabha election in 2014 didn’t declare his interest in offshore entities.

In his detailed letter/advertisement, Sinha has pointed out

(i)Malta has an approved jurisdiction of full Double Taxation Avoidance Agreement (DTAA) with India and doesn’t amount to “tax evasion, money laundering or any malafide intent”;

(iii)Rajya Sabha nomination form requires only “provisions of details of Assets and Liabilities of which I am the owner or direct beneficiary” which is not true in Sinha’s case (see the full advertisement in pic).

Sinha’s anguish stems from a clearly “vested interest” of Indian Express in publishing the report—and a sneering a mocking version of it online—which he termed as “misleading and devoid of facts,” despite Sinha having shared the details with Indian Express !

“These facts were transparently shared with the Indian Express team prior to publication of the news report. Despite that, they have carried the misleading report devoid of facts and indulged in reputation assassination for vested interests.”

“If the Indian Express claims to be the beacon of independent journalism, why are they not targeting other reputed public figures such as Sachin Pilot, P. Chidambaram, Pinarayi Vijayan etc who have all been named in the ICU Paradise Papers?”

“The Indian Express report is unethical journalism in the name of freedom of the press/freedom of speech and is motivated attempt to tarnish my reputation built over decades. It is extremely sad to see the high standards of neutral and independent journalism set by Ramnath Goenka being destroyed under the current editorial leadership.”

One doesn’t know if Sinha tried to put this advertisement in Indian Express for it’s not in its today’s edition. Or, if he did and failed in his attempt. Still, the matter is now in public domain and Express would’ve to come up with an explanation.

At least the Privilege Proceedings against Indian Express is being sought for. Whether Editors’ Guild of India reacts to it is a guess as good as yours as mine. Press Council of India, a Central Statutory Authority, under the Ministry of Information and Broadcasting—Mrs Smriti Irani being at the helm—surely should step in as Fake News in Mainstream Media—Lutyens’ Media—is more rampant than ever.