PFI in touch with an al-Qaeda linked Turkish group, claims a report 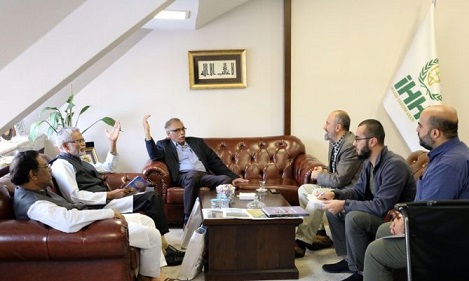 A European body has alleged that a Turkish jihadist group has networked with India’s Popular Front of India (PFI), presently in crosshairs with the Indian government for its role in anti-CAA stir and allegedly an extremist and militant Islamist organization.

According to Nordic Monitor, a European research organization, EM Abdul Rahiman and Prof. P Koya, key members of the national executive council of the PFI, were privately hosted in Istanbul by the IHH, an al-Qaeda-linked Turkish group two years ago. In light of subsequent anti-CAA stir, Delhi Riots and Hathras incident, this carries a great deal of significance.

“PFI had been chosen as it had endorsed Erdogan after a 2016 coup attempt and was promoted by Turkey’s state-run Anadolu news agency as a group whose members ‘were abused by Indian police’. The meeting was held to discuss promoting a partnership between the two organizations in various fields,” the report was quoted by Republicworld.

The meeting was held at IHH headquarters in Istanbul on October 20, 2018 and attended by IHH secretary-general Durmus Aydin and vice-president Huseyin Oruc.

The IHH has been identified as an organization closely works with Turkish intelligence service MIT, led by Turkish President Recep Tayyip Erdogan, and has been accused of smuggling arms to al-Qaeda-affiliated groups in Syria in 2014.

The Enforcement Directorate had accused the PFI of funding anti-CAA riots across the country. As per the investigation, ED has found a link between the Rs 120 crores deposited in 73 bank accounts allegedly belonging to PFI.

ED has also released bank statements as proof alleging that 90 withdrawals were made in a day during the protest against the CAA. The National Investigation Agency, in Kerala gold smuggling case, has also revealed that one of the five accused allegedly having terror links was PFI member Mohammed Ali.

After the horrific alleged gang-rape of a 19-year-old, there was an atmosphere of communal tension in Uttar Pradesh. UP police claimed in their investigation that a website called ‘Justice for Hathras’ was launched to spread hate speeches, edited pictures, fake news, edited videos and the website allegedly received huge funding from countries abroad, investigative agencies have claimed – naming PFI & SDPI. The UP police had advocated a ban on PFI after the widespread violence in the state.