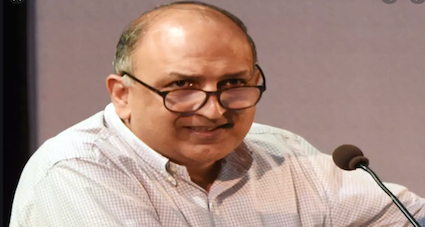 This piece is addressed to students of Ashoka University on strike today. Not to Left or Right as such.

You are upset that Pratap Bhanu Mehta (PBM) was forced to quit allegedly by the founders of the University.

You feel that “fascist” Modi government is behind it.  Your WhatsApp is full of global outrage of professors (Harvard, Yale, Princeton, Oxford), celebrities (Raghuram Rajan, Sheldon Pollock etc) and media outlets (The Quint, The Scroll, The Wire, The Print etc).

You are upset because an injustice has been done. The honourables above, henceforth termed Beacons, feel the same. This is not what a Liberal institution should look like.

I am sure by Liberal you imply freedom for all to put forth their viewpoints, without persecution, and this explains your present angst. Tolerance is the defining foundation of being Liberal.

So, I ask you to question self and Beacons: Why we didn’t protest when first Indian to be elected president of the Student Union of Oxford, Rashmi Sawant, recently was made to quit on remarks which anyone would consider pretty benign.

Let’s say Rashmi’s past comments were not benign. Let’s agree that her saying “Ching Chang” in front of a Buddhist temple in Malaysia is racist and religiously offensive.  But did she deserve to have her own point of view? And if she was made to resign, being the Asian she is, can’t it also be termed as “racist” prejudice by the Powers-that-be? Why you think “Liberals” like you and Beacons have not raised your voice?

Madhu Purnima Kishwar is one of India’s leading intellectuals. To the considerable numbers, opposite you, she is a bigger voice than Pratap Bhanu Mehta. Why do you think when she was invited by one of your own group for a talk in Ashoka University, your teachers led to disruption of her lecture? Do you think it begs a question from your faculty and Beacons?

@AshokaUniversity is liberal, then Taliban is progressive
ONLY university where after being invited by student group to lecture, Ashoka teachers led disruption of my lecture.
bihttps://www.dharmadispatch.in/commentary/the-exit-of-pratap-bhanu-mehta-is-a-harbinger-of-cleaning-up

You mustn’t have heard of Professor Badri Narayan. He was forced to leave JNU by students: His crime? He had done a seminal work on Dalit castes of north-India which didn’t conform to “Liberal” viewpoint. Why intolerance Beacons? Who no noise? Why fascism for other viewpoint?

Swapan Dasgupta, a preeminent scholar and academician—look for any interaction he has had with “Liberals” on YouTube and you would agree he hasn’t come off worse—was physically locked for six hours in Visva-Bharti University in West Bengal for committing the grave crime of addressing students.  Now come on, why not same treatment as PBM to him, Beacons?

One of your Beacons, Ashutosh Varshney, a professor based in US has tweeted in the wake of PBM episode. Please read below

This man canceled my talk @BrownUniversity because he doesn’t want students to know facts & views contrarian to his on Kashmir. And he has the audacity to THREATEN India’s @AshokaUniv founders for not taking orders from him! Sad to see Brown eroding it’s stature with such a bully https://t.co/oBkATh49P4

Now, on the face of it, Varshney could be right that “Liberal” funding won’t now come Ashoka University’s way because of  intolerance meted out to PBM.  But he is the same man who had a talk of Aarti Tikoo Singh in Brown University allegedly cancelled as the view of latter on Kashmir conflicted with his own. Check the social media followers of two: Aarti is in a different league to Ashutosh.  But that’s besides the point: The issue is:  “Freedom” and “tolerance” should be non-negotiable for all. Not the ones you prefer. That’s fascism.

Let’s say you find my words as whataboutery. Let’s say you still find the alleged action of Ashoka University founders as unjust. About browbeating a different viewpoint into submission.

Let’s do a hypothesis. Let’s say you support prime minister Narendra Modi. But do you dare express it in the Campus? For once its known, your fellow students, professors, faculty would double down on you. Your stay in Campus would be hell. Prospets in career over.

And today if you are sitting under pressure of peers with placards in hand, answer to self if you would look in the eye of your progeny in coming decades and say: Stand Up To What You Believe In. Because you yourself have failed the test abjectly. And that ‘s oppression. That’s fascism. Contrary to what you are led to believe.

Voltaire once said: I disapprove of what you say, but I will defend to the death your right to say it.

Salman Rushdie once said he disagreed with the Danish editor who published offensive cartoons on Prophet Muhammad and paid with his life, among others. That this is not the “freedom of speech” he agrees with. But he said: I would go to the end of the world to protect the right of Editor to have his say without being bullied or killed.

I too agree to the philosophy. Besides the moral pomposity, there is a practical reason too: Once you censure a word, a viewpoint, it acquires glamour, a certain currency,  and attracts more converts even if it moves below the surface.

So if the founders of Ashok University indeed turned out PBM, I would disagree with the move. But I would certainly lend an ear to the other side.

What if trustees are to say that “neutrality” is the basis of any institution, more so an educational one. And that PBM was anything but neutral in his conduct.  When did he, for instance, during his polemical career, criticize the Congress government for various scams which were the hallmark of UPA-II?

Should we see a pattern in his bias that in past (a) PBM was convenor of Knowledge Commission under Manmohan Singh government; (b) board member of NIPFP under finance ministry; (c) executive member of Nehru memorial museum and library; (d) and used to tour abroad through the good offices of Rajiv Gandhi Foundation?

Or that PBM once worked for Namati which is largely funded by dreaded George Soros? That he was also on the advisory board of V-Dem, a Swedish organisation which this month has “downgraded” India’s democracy.  All this while still working with Ashoka? Is it neutral or partisan? Could we fault the Ashoka University founders if they feel it went against the tenet of their philosophy of neutrality in discourse.

Consider PBM’s utterances and incitements against the present dispensation in India. After Ayodhya verdict, he wrote: “Ayodhya’s Ram temple is first real colonisation of Hinduism by political power.” How? When the case itself wasn’t filed by the Modi government? When the process of unlocking “doors” in Ayodhya was done by Rajiv Gandhi? When it was a bench of Supreme Court which arrived at the verdict? PBM is the man who once termed Supreme Court’s verdicts as “barbarism.”

As I clearly remember, the anti-CAA protests began right after he wrote in Indian Express on CAA: “…We should recognise that this direction is not going to be set through the nice formalisation of law, or the contrived conventions we can adhere to in normal times. The direction is going to be set by the mob, by brute power, by mobilisation.”

Where do you think is respect for India’s “democracy” and “constitution” in this utterance? It’s call for civil disorder, civil unrest, Civil War. Against the viewpoint of tens of millions who’ve made their choice on who should be leading them.

On what point do you think PBM be supported? Academic neutrality, respect for democracy, reverence for Constitution? Is it “Liberal” or “Fascism” on your part to tear down the reputation of your own institution and deny Ashoka University its founding principle of neutrality?

So if you are true “Liberal”, allow other to have freedom of own views. Show tolerance. Or you are throttling the very principle which you today are wearing as a badge of honour.