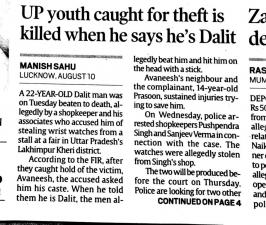 With great delight readers we announce the forming of People’s Press Council. Regularly, we will analyse and ask a few questions to our mainsream media. You could add your questions @mypresscouncil We will be more than happy to receive the response of our media to people’s questions.

The first mock hearing of People’s Press Council concerns the “Indalit Express” of August 11, 2016. They are asked a few questions on their Front Page story of today, headlined: “UP youth caught for theft is killed when he says he’s Dalit.”

Press Council: Your report says that the unfortunate victim was killed on disclosing his Dalit identity, right?

Press Council: And that this was witnessed by his neighbour Prasoon, a first-hand eye-witness. Right.

Press Council: And Prasoon is a 14-year-old neighbour of the victim who was accompanying him, Right.

Press Council: And that Prasoon was injured by the assaulters when he tried to intervene, forcing him to run away, right.

Press Council: So the basis of all your reportage is that FIR. Right.

Press Council : I’m assuming that your reporter didn’t see the FIR and only went by the police version, Right.

Press Council: Since FIR is a complaint, it may or may not be the truth. The decision finally rests with the courts. Right.

Press Council: But your headline leaves no room for the courts. It has announced a verdict on its own that the victim was murdered only after he said he’s Dalit. I didn’t see the word “allegedly” in your headline?

Indalit Express: It was for lack of space in headline.

Press Council: So for lack of space in headline, you are willing to put to peril the lives of four alleged assaulters as they have been booked under the SC/ST Act 1989? Right…

Press Council: That cases under SC/ST Act 1989, if proven right, could mean an imprisonment of 10 years or more.

Indalit Express: But this SC/ST Act 1989 was slapped by the police after their own investigations. We didn’t have anything to do with it.

Press Council: Completely true. But neither police nor you the newspaper, can decide on the validity of charges. Only Courts can. Right.

Press Council: Your report could thus be seen as prejudicial to justice. That’s why we are today face-to-face on the matter. Right.

Press Council: If I want to give you benefit of doubt, I will say it’s been oversight.

Press Council: But if I want to be matter of fact, I would say you are deliberately pursuing a polarization agenda which if we go by the laws of land, is itself punishable for inciting communal/casteist antagonism in India. Right.

Press Council: As an example, you are running these days a series on Dalits in Gujarat on your Front Page. But you choose to bury inside the statement of new Gujarat CM’s statement on Una flogging, and I quote: “They government did everything it could on the Dalit issue. The FIR was filed, culprits were arrested, four policemen were suspended and the case was transferred to CID.” If you were the government, let me ask you, what else you could have done?

Press Council: Taking the inference further, we would like to declare that you, the newspaper, apparently don’t believe in Indian legal system or judiciary. Otherwise you would’ve questioned the disproportionate attention on Una, as reported by NewsBred the other day.

Indalit Express: That has no basis.

Press Council: Ok, let me cite an example. In today’s newspapers, I see the Allahabad High Court has asked the UP government to present a status report on the Bulandshahr gang rape case. This has been reportedly prominently in all the mainstream newspapers. I didn’t see a line on this news in your newspaper.

Indalit Express: It could have been an oversight.

Press Council: Thank god you said oversight and not lack of space. For I saw around a dozen stories on Dalits or Cows in your newspaper today.

Indalit Express: That’s because we champion the cause of downtrodden and communal/caste victims.

Press Council: And not in the safety of women who are raped on our highways. Right.

Indalit Express: We said it was an oversight.

Press Council: Okay, we will see how you cover the case on your August 12, 2016 issue tomorrow. And show me you are unbiased by putting it on Front Page. Now you can’t say it would be an oversight. You have 24 hours to avoid this oversight.

So we the readers, let’s hope there won’t be an oversight in Indalit Express of tomorrow. That our mothers and sisters and daughters also matter. That their rape issue doesn’t become a non-news only because they are not dalits or cows.