Protesting farmers and a friendly neighbourhood: How deadly is cocktail? 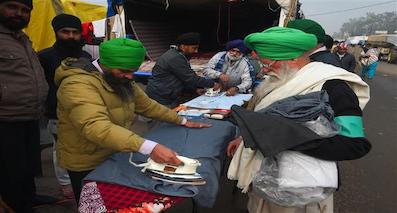 So many Balidan, Shradhanjali and Sadbhavana Diwas etc after, so many talks after, so many rallies after, Republic Day after, things haven’t moved an inch. It’s the same patch of tarmac roads, same old Singhu, Tikri and Ghazipur borders, the same old rona-dhona. There is an extra buffer of trenches, barbed wire-fencing and the spectacle of fixed nails on the road. Heels have dug in.

You and I need suitcases for a vacation this long; cash left below the pillows of parents to pull by; and a good staff to manage businesses in absence. But in the case of our stoic farmers, apparently “poor”, home and hearth isn’t an issue at all. They are riding so much on goodwill that pizzas are not in short supply nor are Tostadas though journos skip mentioning the latter, uneducated as they are on finer living.

Be with me and visualise what all you need to stay put for months on road. You need overhead roof, plenty of clothes, plenty of water, plenty of woollens, plenty of food and fruits, plenty of toilets, plenty of kitchens, dishes, pans, spoons, bowl etc and stock of personal hygiene materials. That a maintenance staff is needed for everyday garbage is given. Just get the drift, I say.

It doesn’t look that people back home are doing up-and-down hundreds of kilometres to ensure Veerji is ok. It’s happening in neighbourhood. There is obviously a central mechanism to these protests, a command centre, which ensures it all runs smooth, including briefing to press. But the supply is essentially next door. The insult to tricolour was a blip of a few hours. The protesting farmers have exemplary hosts.

Who are these volunteers? I have no doubt a fair number are fellow farmers of nearby villages. But then there is a sizeable minority too. The memory of Muzaffarnagar riots burn bright. Muzaffarnagar-Saradhana of Begum Samru fame-Ghazipur border is not even two ends in a big city. They are big in numbers too: Over 40 percent in Muzaffarnagar are men of faith five times a day.

I drag you back by a decade and a half when Markandey Katju, as chief justice of Allahabad High Court, ensured visiting Pakistanis who had hopped over in Partition, could revisit India, in which a fair number were from United Provinces now our Uttar Pradesh, for a period of up to 5 years. The visa normally granted was for a month. But Katju, who never could reconcile himself to the Partition, stayed it “till further orders.”

In Katju’s words, since there were a million pending cases, and each would take a minimum of five years to settle, effectively the visa for Pakistani Muslims had been extended to five years!

This media has no time for a coup (Myanmar) next door; or China shifting the war-theatre to Naku-La Pass; or that Captain Amarinder Singh has just confessed—along with all parties sans BJP and AAP—that arhityas or commission agents (see the fifth point in tweet below) alone should procure grains for the Modi government. In other words, the protest is of middlemen, for middlemen, by middlemen and everything else is sham and scam.

Thank leaders of all political parties for coming together in sounding a collective voice through the All Party Resolution against the anti-farmer laws. Punjab is one and would not rest until these laws are repealed. pic.twitter.com/FzNMhb7Ra3

The chicanery, agenda, plot, duplicity is plain view. So is our political class and media. So are globalist forces to whom your Rihannas and Greta Thunbergs are beholden. None is concerned that India’s sovereignty was challenged on Republic Day with a symbolic religious flag; or that the face of your law and order (the police) was beaten black and blue; or that the farmers are dismissive of an elected government and judiciary who want reason and not blackmail to prevail. Nor is there any thought that there is no Singhu, Tikri or Ghazipur elsewhere in the country. Yet a nation of a billion-plus and its elected representatives must surrender itself as hostage.