Rafale: So they found ‘Shastra Puja’ a Hindutva act 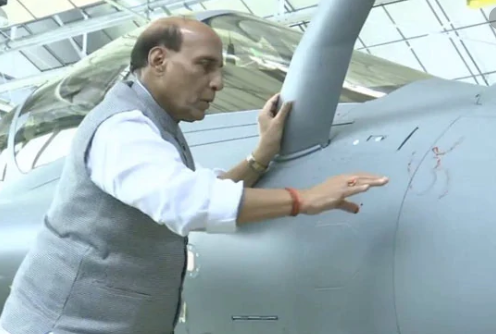 The first of 36 Rafale jets of the first batch was acquired on Tuesday. It was a seminal day, not just because India acquired a massive defence shield but also since it coincided with Vijaydashmi or Dusshera, the day which Indians have celebrated as the win of Good over Evil for centuries now.

Somehow, matters which warm the hearts of millions of Indians causes heart-burn amongst a few who are well-identified now. “The Hindu” mocked the celebrations with “Wait-Its-Due-Only-Next-Year” front page headline; the (Rajdeep) Sardesais and Ghoses (Sagarika) and Dutts (Barkha) were silent as if in a funeral and so were the Gandhis. Yet, one of Congress’ leaders, Sandeep Dikshit, couldn’t hold back and reflected the grumpiness of this brigade: “Why link the acquisition (Rafale) in a religious context,” he contended.

Dikshit was upset that defence minister Rajnath Singh had done a “shastra puja” of Rafale which involved putting lemons in front of its wheels, placing a coconut on its nose and drawing an “Om” on its side cheek. In Dikshit’s book, it was a religious act or an assertion of Hindutva,  a “secular” state indulging in communalism. (Err, Mr Dikshit, your thoughts on the then prime minister Manmohan Singh, choosing the day of Sonia Gandhi’s birthday–December 9, 2006—to declare that Muslims have the first right on the resources of the country. Was it secular?).

Understandably, it found echo amongst the young and impressionables. So here it is, an attempt for rationale to prevail over outbursts:

·         “Shastra Puja” is a routine marker with our armed forces on new inductions of weaponry. It happened when MiGs, Jaguars, Tejas, practically every new addition, was made. Every ship which slides off keels is launched with coconut-breaking ceremony. Even the Supreme Court has said that “Shastra Puja” doesn’t impinge on secularism.

·         The induction of Rafale happened on the 87th anniversary of Indian Air Force. “Vijaydashmi” might’ve been coincidental and not necessarily the reason for choice of date.

·         It’s a flawed approach to view “shastra puja” as an assertion of Hindu identity. As it would be to view the reading of “kalma”as Islamic when Tejas was inducted on July 2, 2016.  When soldiers are greeted with garlands and tilak on return to their villages, is it communal? Besides, placing of lemons in front of tyres, applying “Om” on its steering and breaking a coconut in front of the vehicle are common actions millions of us do before a newly-bought vehicle reaches home.

But trust our spoilsports to keep taking the matter to absurd lengths. A twitterati argued thus: “But buying a car and doing all this is personal. Whereas Rafale’s was an act by the ruling government. Don’t they know that India is secular and state and religion must not cross each other’s path?”

First thing first. India wasn’t a secular state to begin with. This happened when our Constitution was arbitrarily changed by a chaffed Indira Gandhi during the Emergency without the consent of the lawmakers of the Parliament. There are various articles in the Constitution—like freedom of propagation of own faith for monotheist religions like Islam and Christianity—which can’t be termed secular.

Now, if the Indian state indeed is “secular”why does it interfere and control Hindu temples? As writer and scientist Anand Ranganathan points out : Governments of five southern states control 90,700 temples; TN Temple Trusts own 478,000 acres of land. Tamil Nadu state government alone controls 36,425 mutts: It gives them billions of rupees. By a rough estimate, the total revenue earned from temples by state government till now would be somewhere between Rs 10-15 lakh crores.

Is this secularism? Tamil Nadu government has a temple in its logo—is it secular? If you want religion should be out of bounds for the State then the State should also keep out of religion.

On a different note, the in-your-face “Shastra Puja” hasn’t gone unnoticed to the discerners. A confident Bharatiya Janata Party (BJP) is no longer embarrassed in asserting the cultural identity of the nation. And to hell with those who portray it as tyranny of the majority, communal Hindutva and minority-in-crisis narrative.