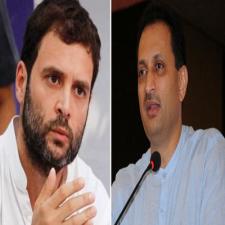 I am amazed that neither Congress party nor Rahul Gandhi; nor for that matter a shrill Lutyens Media has taken up Union Minister Ananth Kumar Hegde remarks, insinuating that Rahul Gandhi is practically a “Muslim” (For background, click here).

This is a great affront to our Janeudhari  Gandhi who claims to be a “Shiva bhakt.” Doubts over Rahul Gandhi’s religion is also a political catastrophe. Why Rahul Gandhi or Congress is not going for the throat of Hegde? Why Randeep Surjewala is missing another opportunity of a press conference? Why Sagarika Ghose, with a biography of Indira Gandhi, isn’t shooting off her insults? Why Rajdeep Sardesai, Shekhar Gupta, Barkha Dutt have zipped their mouths? Why Prashant Bhushan isn’t threatening a petition?

It’s been five days since Hegde lit up this controversy like none else in a game called Indian politics. It’s a bigger news that Rafale, Article 370 or, dare I say, even Ayodhya  dispute. For it fuels gossip on Feroze Gandhi, grandfather of Rahul Gandhi, which alludes that he was a Muslim and imputes why Congress powers are doing everything at their command to ensure he is best forgotten:  no celebration or mourning on Feroze Gandhi’s birth or death anniversary; no full page ads in newspapers as is the case with Indira Gandhi or her son Rajiv Gandhi. It puts the credibility of entire existence of Congress party post Independence.

Such insinuations claim that M.O. Mathai, Nehru’s personal secretary, has written in his book that “due to some inevitable reason, the otherwise prudent Nehru allowed this wedding (Feroze-Indira wedding) to be performed in Vedic style despite knowing that performing an inter-case and inter-religious marriage in Vedic style was illegal.” One is unable to confirm this claim since Mathai’s book “Reminiscences of the Nehru Age” is banned in India. It was written in 1978 but is banned till todate though nobody is clear why the book has been kept away from the public domain.  Social activist lawyers like Prashant Bhushan or Lutyens Media with zero tolerance on “Freedom of Expression” as a fundamental, Constitutionally-enshrined right, are strangely silent (even as every day we see stomping feet on why Official Secrets Act is still in vogue and why the Sedition Act must be done away with).

Though nobody is hauling Hegde through the coals by invoking sections of IPC which concern character assassination at best and communal instigation at worst, Indian Express has appeared brainless in their beating-around-the-bush  report –“Remarks against Rahul: Poll panel seeks video footage”– on Page 8 today. It says it has “learnt” that Election Commission (EC) has sought the video of Hegde’s speech. Indian Express claims “The Model Code of Conduct (MCC) which is enforced from the day of announcement of elections till the last date of polling” – and then punctures its own argument by conceding that Hegde’s remarks were made a day before the MCC came into effect!!! (Then why is EC concerning itself with the video? A million-dollar question).

These newspapers have neither columns nor editorials written in disgust. Nor there are rent-a-byte brigade of Anand Sharma, Digvijay Singh, Kapil Sibal or Sitaram Yechury appearing in Indian Express (It’s another matter that despite Supreme Court order, newspapers like The Hindu continue to have questioning columns on Ayodhya dispute and mediation team like they have one today).

One can understand that why Mayawati nor Mamata nor Mehbooba for that matter and other potential pre/post-Poll allies such as Akhilesh Yadav, CPI (M), Lalu Yadav, Arvind Kejriwal are sitting on the fence on the matter. But Rahul Gandhi himself has never shied away from taking the attack into the enemy’s camp. Why, just a couple of months ago, he had called Ananth Hegde as a national embarrassment.

That’s why I find this silence most disturbing. How I wish that Rahul Gandhi and Congress party won’t allow Hegde to get away on a matter which could shake off the confidence of millions. Hegde wants himself to be put on “record” and Rahul Gandhi must show it’s a bluff.