Rahul Gandhi ‘nervous and unformed’: Barack Obama pens him in his memoirs 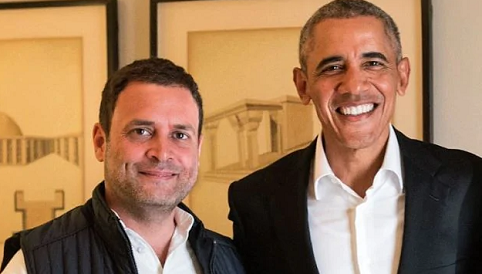 Barak Obama’s new book ‘A Promised Land’ has hit the shelves earlier this week and according to the New York Times, the autobiography is ‘more political than personal.

Interestingly, Rahul Gandhi has found mention in his latest book. Referring to Gandhi Scion, Obama writes, “Rahul Gandhi has a nervous, unformed quality about him as if he were a student who’d done the coursework and was eager to impress the teacher but deep down lacked either the aptitude or the passion to master the subject.”

The excerpts from Obama’s memoir were mentioned by Nigerian writer Chimamanda Ngozi Adichie in her book review published in The New York Times.

Rahul Gandhi had met Obama during his last visit to India in December 2017.

Several global leaders and their traits were also described by the former US President in his memoir.

Vladimir Putin reminds Obama of tough, street-smart ward bosses who used to run the Chicago machine. “Physically, he was unremarkable,” he wrote.

Describing former Chinese President Hu Jintao and his quirky way of conducting bilateral talks, Obama said that Jintao read from stacks of prepared papers during a private meeting which is so monotonous that he once considered suggesting that “both could save each other time by just exchanging papers and reading them at their leisure.”

“Joe Biden is a decent, honest, loyal man who Obama senses ‘might get prickly if he thought he wasn’t given his due – a quality that might flare up when dealing with a much younger boss”.