Rajasthan could be slipping out of Congress’ hands: Telltale signs are aplenty 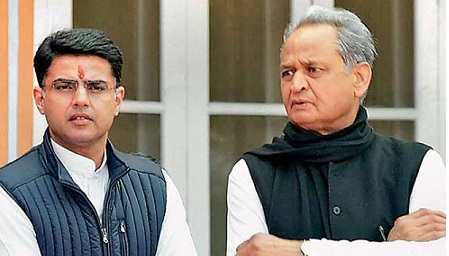 One needs to keep a close watch on Rajasthan. The ground might be slipping underneath Congress and Ashok Gehlot government in the state. The chief minister had recently claimed that efforts were on to topple his government.

The last time BJP came close to doing it was six months ago. Then deputy chief minister Sachin Pilot had raised the banner of revolt. He had gone knocking at the doors of Gandhis with a list of grievances and the grudges he held against Gehlot. He had alleged that Gehlot was losing no opportunity to insult him who, in a sort of vindication of this allegation, did go on to call his young deputy as a “worthless person.”

Pilot had then backed down, on the assurance of Congress high command that a committee would look into his grievances and that the “rebels” would get meaty roles in the functioning of the state government. He had managed to lay siege on Gehlot and it was good enough for him to bide his time and back down for the time being.

Now this revolt might be at works again. Pilot has lost badly in the very constituency—Tonk—he calls his own in the Panchayati Samiti and Zila Parishad elections. Damningly, Pilot didn’t make much effort in the run-up to polls too. Yes, he had tested positive on Covid-19, and he was active on social media, but Pilot had appeared almost indifferent to rural polls.

The election in Rajasthan’s hinterland could be far bigger in consequences than some poll in some obscure village contested by some little candidates would suggest. One, it’s a vote against Gehlot which is the kind of projection Pilot needs to press home his case. Since Gehlot undermines him at every step, Pilot would certainly be more than happy to return the compliment. Two, Gehlot’s blatant promotion of his son Vaibhav, who lost 2019 Lok Sabha polls and has since been hoisted as head of Rajasthan Cricket Association, is the kind of deal which upsets Pilot and his supporters a great deal.  Three, Gehlot’s handling of a minor’s tragedy even as the anger on Hathras was raging, not to say his opinions on Love Jihad, seems to have had a polarising effect, the outcome of which has been visible in these rural elections.

BJP now controls Rajasthan’s villages by its wins in Zila Parishads and Panchayati Samitis. It’s a first in last decade and a half. It’s also a first in that a political party in power in Rajasthan has failed to win mandate in the rural belt. BJP could say with some justification that it’s work is finding resonance from Rajasthan to Telangana to Arunachal Pradesh, and better still, that its Farm Acts 2020 has been given a resounding mandate and that there is more than what meets eyes in the present farmers’ agitation.

There is little denying Pilot has genuine grievances. He revived Congress from the pits by tirelessly preparing its ground for four years before it bore fruit into the 2018 assembly elections. He now wanted his booty but it instead went to a foggy Gehlot who began clipping his wings ruthlessly. Pilot didn’t get the bureaucrats he wanted in his constituency and his loyalists, like Raghu Sharma, changed ships midstream. His loyalists were subjected to criminal investigations which was the last straw. Pilot took his MLAs and camped himself in Delhi before Congress high command asked his warring state leaders to shake hands.

But it was and remains a temporary truce. Pilot is an ambitious young man, not much different from his father Rajesh Pilot who once contested for the presidentship of Congress. Rajesh Pilot was said to be a rebel without a pause. He routinely upset his prime minister PV Narasimha Rao when in cabinet. As a minister for internal security, Rajesh Pilot had an important “guru”, Chandraswami, arrested despite his close ties to Congress leadership. As said, he also contested for Congress president post against loyalist Sitaram Kesri. It’s believed he also wanted to challenge Sonia Gandhi’s elevation as party head before he was talked out of it by others. Sachin is a chip of the same old block.

So would Congress lose power in Rajasthan as it has done in Karnataka and Madhya Pradesh? The obvious route of course would be that Pilot junks Gehlot and crosses over. If not, BJP could take heart that the next assembly elections in 2023 would be theirs. Pilot and Gehlot would keep sharing a tenuous relationship which is given when ambitions collide. Once Rajasthan comes in its fold, BJP would control the narrative in India’s heartland—Uttar Pradesh, Rajasthan, Madhya Pradesh, Bihar—and would be unassailable.

If it’s a nightmarish prospect of Congress and Opposition, I just said it.