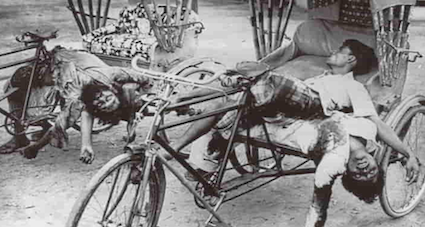 There is one chapter in Vortex: The true story of history’s deadliest storm and the liberation of Bangladesh, which is from the stable of HarperCollins that caught my immediate attention. It talked about one particular day. That day was 19 November 1970, at Manpura Island, East Pakistan. The crowds got charged up when they were told Sheikh Mujibur Rehman was visiting the village.

Mujib had walked through the bloody killing fields, he was long accustomed to visit scenes of suffering and despair, but even he was shocked at Manpura’s utter destitution. Scanning the horizon, he said, to no one in particular: “God, why have you destroyed everything.” Hundreds of people surrounded the dock, begging for their first scrap of real food in almost a week. Mujib steeled himself and spoke with determination: “I am Sheikh Mujibur Rehman, from the Awami League. I am here to help our Bengali brothers in their time of need. Who is leading the relief effort here?”

And later, the choppers came with sacks of rice. The fifty-pound rice bags slammed into the earth at terminal velocity, 120 miles per hour—two landed on hungry men, killing both instantly. On another island, the US ambassador Joseph Farland rode in on a helicopter to hand out sacks of rice, molasses and salt. Starving people rushed to the ambassador in his presumed moment of triumph. Scared of the mob, he kicked the bags out and ordered a retreat. The pilot whisked him up to safety, slicing three people with the tail rotor as he swung the helicopter skywards.

That’s war-ravaged East Pakistan, that’s 1971, that’s a bloody war that changed the economics of South Asia. And it is all written in Vortex. It is a brilliant recount of the war in East Pakistan, the eventual emergence of Bangladesh. Writers Scott Carney, who has done extensive work on child traffickers and global organ trade, and Jason Miklian, who has done extensive work on India’s human security, collaborated for this wonderfully crafted tome.

The writers have narrated in detail some of the deadliest developments in the subcontinent brilliantly. Let’s start with the war order against India signed by Yayha Khan. Pakistan’s President was enraged because he found his son Ali in a five-star hotel with a woman and he almost killed his son. But he did not and returned home to face a furious Fakhra Khan, his wife, who told him that family issues of the Khans were reflecting on the state of Pakistan.

The chapter that talks about Pakistan’s attack on India opens like a scene from Hollywood. Write the authors: “American-built B-57s and F-86s launched from airfields in West Pakistan and dropped hundreds of bombs all across northwestern India, while AKK Niazi sat down to a plate of chicken tikka and bubbly, crispy stacks of naans.”

Indian Prime Minister Indira Gandhi was in Calcutta (not Kolkata then) when Pakistan bombed India. The exercise was without much success. The Pakistani planes bombed parts of Rajasthan, Punjab and even Agra, home to the majestic Taj Mahal. But it was short of the mark because casualties were light, write the authors. “India had moved the bulk of its air force inland a week earlier. Most Pakistani bombs exploded without doing any real damage.”

Gandhi delivered the war cry to the Indian leadership in Parliament. She told the Lok Sabha: “We meet as a fighting Parliament. A war has been forced upon us, a war that we did not seek and did our utmost to prevent.” With that declaration, war had expanded from East Pakistan to all of South Asia. Indian troops and Mukti Bahini fighters surged over the border.

The war ended in December after 90,000 Pakistani troops surrendered to Indian troops. Indian envoys worked overtime across the world to secure support for the cause of Bangladesh, the new nation. It was a tough call, ostensibly because two biggest democracies of the world, the United States and the United Kingdom, were openly discounting the Pak army’s atrocities and not condemning General Yahya Khan for refusing to keep his commitment to lift martial law and restore democracy by handing over power to a party which had secured an overwhelming popular mandate. One needs to remember that almost 70% of the UN members opposed an independent Bangladesh around March, 1971. They included Ceylon, Burma, Indonesia and Malaysia, among others.

The book lists the massacres of 1971, the brutal rapes and destruction heaped on East Pakistan by Gen Yahya Khan’s soldiers in towns and villages. An estimated 200,000 women were raped by Pakistani soldiers, ordeal of these women—for decades—remained hidden from public view. Those hapless women endured decades of shaming and isolation. Very sadly, they also faced mass discrimination that even affected their next generation. There was a genocide of over three million people.

When the Indian soldiers moved in, Indian Army’s Major General Shahbeg Singh and Brigadier Sant Singh worked overtime to train fighters of the Mukti Bahini and turned them into a dreaded guerilla force.

And then there was the role of the US, which continued to support Pakistan. US President Richard Nixon was at the forefront of it. The book lists a cable from Nixon and Henry Kissinger, the Secretary of State, that Washington sent to Moscow. Read the tone: “We have waited for your response to restrain India without reply. I have now set in motion certain moves that cannot be reversed. I cannot emphasise too strongly that time is of the essence to avoid consequences neither of us want.”

And then the writers write: “Nixon called the secretary of the navy and ordered the Big E to proceed deeper into the Bay of Bengal. As Kissinger later said, it became urgent to convince them (read Kremlin) that we meant business.”

Indian soldiers had started trickling into Dacca from the morning of 15 December 1971. On the 16th morning, there were about 3,000 Indian troops in the city, whereas the strength of the Pakistanis was beyond 25,000. Repeated ultimatum served to the Pakistanis by Gen Sam Manekshaw to surrender had demoralised the impoverished Pakistani soldiers. They could not put up any resistance and surrendered on 16 December 1971.

A nation, Bangladesh, was born. Bangladesh’s leader Sheikh Mujibur Rahman declared the country’s independence on 26 March 1971, the day after the Pakistan Army had launched Operation Searchlight to crush the Bangla movement. A fascinating read.