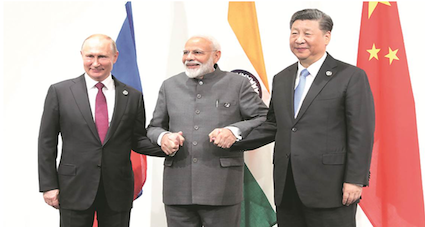 If you look at the world map, you would see the powers controlling the seas are our West.

It’s in their interest that land mass called Eurasia doesn’t come together.

It could help explain you the various revolutions and coups; anarchy and chaos which frequently make headlines in our neighbourhood and are window-dressed as “liberation” and “democracy” to have we drugged citizens in consent.

So these powers which control us term the SCO (Shanghai Cooperation Organization) as no better than a “regional summit” never mind its members (Russia, China, India, Pakistan and now Iran—along with “Stans” of Central Asia – Uzbekistan, Kyrgyzstan, Tajikistan, Kazakhstan); to go with Observer nations (Belarus, Mongolia, Afghanistan) and Dialogue Partners (Armenia, Cambodia, Azerbaijan, Nepal, Turkey, Sri Lanka and soon Egypt) are more than half of world’s population.

That this derision comes from the Powers who themselves are no better than 10-15% of humanity could make you chuckle.

A caution is in order if your blinkered view of the two-day SCO Summit in Samarkand, Uzbekistan (September 15-16) sees it a political and military alliance as a counterweight to West.

At best you could term it as the oncoming of a multipolar world against the unipolarity of the United States where wars and repressions are traded for cooperation on reducing poverty, ensuring food, health and energy through mutual dialogue.

Its just not cooperation on building trade routes and supply chains, or becoming a piece amongst a set of networks like BRI, BRICS, EAEU, EEF, INSTC or Pakafuz Railway. It might not register readily in your mind but I suggest you look for them for it’s soon going to sweep us off our feet.

After all, you wouldn’t have missed the trading in national currencies which Ruble and Yuan handle with aplomb and India’s Rupee is now a gleeful partner in this enterprise. These new transit corridors in works would be a waste if Dollar, Swift or your IMFs/WTOs/WBs bring it to a grief: So we might hear more on plans on a new common currency in next couple of days. (EU too has Euro, so don’t treat it as a girding up loins by SCO actors.)

Think about it: Won’t it be good that what happened to North Africa or West Asia —our Yemen, Syria, Libya, Iraq etc—doesn’t happen to Central Asia?

It’s an absolute priority of Russia and China, the two allies driving this convergence who could well have been rivals some other day in this region. China also has Xinjiang in mind which has long been in the eye of the West.

These actors don’t want chaos at the door—like India who was extremely upset when Afghanistan was “thrown under the bus”—and prefer “indivisible security” for all, a demand which incidentally was met by slapping Russia with the Ukraine Conundrum in February. Central Asia, needless to add, too don’t want trouble at home. Nobody has missed the recent trouble in Kazakhstan which was squashed by the Russia-led CSTO (Collective Security Treaty Organization).

The truth is, in the 21 years of SCO’s existence, multi-tiered, multi-sector cooperation mechanisms are being hammered into place. In recent Eastern Economic Forum (EEF) in Vladivostok, SCO’s interpolation with the ASEAN (Association of Southeast Asian Nations) was discussed at length.

The beauty of this multipolar vision is that nobody is being coerced. China proposes a free trade zone but is ok if there are reservations; Uzbekistan is holding itself back on EAEU but Russia has no problem with it. The integration—free movement of goods, people, services and capital—could happen in time but an organic way fits like a glove with this vision of a multipolar world.

There is much to look forward to Indian prime minister Narendra Modi’s presence in the summit to see how far his vision of 21st-century-is-Asia’s is advanced.

India badly wants INSTC which frees it from the geographical shackles and links Mumbai with Moscow, opening up the Eurasia’s land route for its growing economic might. It would make India a credible player in Russian Far East, in the multipolar hub.

India all along has stressed QUAD as one of collective peace and development, striking a dissonant note from West’s war games. India looks for political stability and not confrontation in its neighbourhood. China too doesn’t want mutual differences to come in the way of larger vision, a sign of it is the mutual disengagement of two armies in Ladakh after a two-year stand-off.

India this year would be heading the SCO interbank consortium where partners use a credit line from the Bank of China. It is also engaged in setting up a free trade agreement with the EAEU.

Look at this from a vantage position and it would all make sense. Central Asia doesn’t have outlet to sea, it’s in their interest that intra-trade picks up. Iran already has over a thousand companies operational in this region.

Host Uzbekistan has much to spur its growth. The venue Samarkand once was the heart of silk road before “maritime silkroad” took the world over. Timur, for those conversant with history would recall, held sway from northern India to Black Sea.

It dazzled Alexander the Great in 329 BC; its golden peaches were craved by the Middle Kingdom. This is a setting which would befit Modi, Xi and Putin on the same platform: The lost history of heritage once again defining the future.