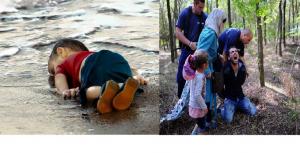 Serbia has a problem. It has tens of thousands of asylum-seekers arriving at its border village of Miratovac. This miserable humanity has looked to move on to Hungary, a European Union country, for destinations such as Germany and Sweden.

Now with Hungary blocking the passage with the erection of a 175-km long razor,barbed fence at its border, some 600 kilometres north of Miratovac, and threatening to use its armed forces against refugees by September 15, Serbia has to find a way to protect the lives of thousands.

The Commissariat for Refugees and Migration put to figure of asylum-seekers in Serbia to 22,000 in the firsts five months of 2015. It’s only a continuation of a crisis that has lasted for nearly quarter of a century now.

Serbia is standing up for European Union (EU) without being a part of it. Europe, which itself was recipient of huge generosity from others during the displacement of World War II. Today it is almost barbaric to the mushrooming refugee crisis. Governments such as Poland, Bulgaria and Slovakia have expressed a preference for only Christian refugees.

The reasons offered to keep asylum-seekers off limits are inane and flimsy. But before we take up the matter, let’s look at what the figures tell us.

In the first half of 2015, a total of 340,000 refugees arrived at Europe’s footsteps. It’s less than 0.1 percent of the EU’s population of 500 million. Compare this with Lebanon which hosts 1.2 million Syrian refugees, more than 25 percent of its population.

Demagogues raise the threat of terrorists sneaking into the European heartland along with this influx of refugees. But well-funded terrorists don’t need to put their lives in danger by crossing the Mediterranean Sea or walking hundreds of miles barefoot to Serbia. If they could offer passage to new recruits from Europe, they could as well come over without taking the refugees cover.  It’s the refugees who are fleeing IS in Syria or al-Shabab in Somalia.

Europeans fear for their culture with the influx of refugees. They don’t think of themselves as immigrant nations. The fear in largely Christian Europe is accentuated by the Muslim relgion of most of the new arrivals. But they only have to look at the United States’ example. The US is detaining mothers and small children fleeing harm in Central America today; in the 1880s it went for Chinese exclusion; in the 1940s Japanese-Americans were interred; there was Haitian interdiction in the 1990s, yet most American acknowledge it’s the immigrants which have made up the country today and infused it with vitality, energy and spirit. Today US has 11 million undocumented immigrants or about 3.5 percent of its population. EU has less than 1 percent immigrants in comparison.

You have demagogues who state new arrivals will steal jobs or lower wages. They hide the fact that Europe is ageing rapidly and there are too few young workers supporting too many pensioners. The asylum-seekers have proven perseverance and wit to escape war and repression. They would inject new life, energy and drive in Europe.

So far this year, nearly 200,000 have landed on debt-stricken Greek shores; another 110,000 have arrived by sea to Italy and more than 120,000 by land to Hungary, chiefly through Serbia. Germany has announced it expects to receive 800,000 asylum applications in 2015.

In July, EU ministers fell well short of a previous pledge to relocate a mere 400,000 asylum seekers from Greece and Italy to other member states over a two-year period. It offered places for 32,500 that same month even as 50,000 new arrivals hit the Greek shores.

If Europe could wake up to Serbia, the latter offers examples aplenty. Local residents are offering watermelons from their gardens to asylum-seekers; there are hoses of water running for them to drink from. In Miratovac, people hand out milk to mothers of young children. Stand pipes with fresh water runs all day.

Of course there are smugglers around to take advantage of asylum-seekers’ misery. But then you have men like Agon Ajeti, a coordinator at Presevo Youth Center who has been working with the NGO Youth for Refugees as an unpaid volunteer in Miratovac since June. He and his team of volunteers can’t stop smugglers but they do everything possible to make the refugees be aware of free-bus service. Everytime a new batch of refugees stream in, Agon walks up to them, greets them and says the bus is “belash”, meaning “free” in Arabic.

The Hungarian severity could now divert migrant traffic from Serbia. The refugees could look to depart from Istanbul to Bulgaria (with its preference for Christian refugees) or from Greece towards Albania (the hub of trafficking mafia).

Europe today needs to revise the “Dublin rule” which mandates refugees to return to the first country they had checked in on the continent. Germany and Sweden are ready to dump the rule. The others must follow suit. All it does is to trap asylum-seekers in EU countries that lack the capacity to protect the fleeing humanity from ruthless traffickers.

Letting this humanity drown itself in the Mediterranean Sea or risk itself at the hands of smugglers as a sort of deterrent is morally repugnant. Turning its back on refugees, Europe is only empowering mafias who have little concern on women raped; children enslaved and men robbed of their last penny.

Europe can accommodate this humanity. It doesn’t lack capacity—only a political will.

The writer’s book ‘HOW UNITED STATES SHOT HUMANITY: Muslims Ruined; Europe Next” is a troubling account of the impending crisis in Europe which could be worse than World War II.