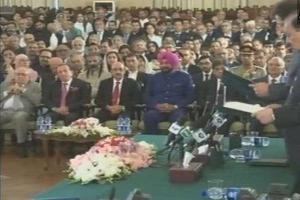 Navjot Singh Sidhu has done few dumber things in his life than going to Pakistan in the swearing-in ceremony of his “friend” Imran Khan. It didn’t help that he sought to justify it on many counts.

In essence Sidhu and his supporters’ defense is that (a) He went to promote peace and Narendra Modi had done no less when had dropped by in former Prime Minister Nawaz Sharif’s family wedding; (b) he hugged Pakistan army chief Qamar Javed Bajwa for the latter had promised to facilitate Sikh pilgrims visits from across the border; and (c) in Imran Khan he sees infinite possibility of “peace and goodwill” between the two countries.

Sidhu is completely innocent of the fact that multiple peace initiatives from New Delhi were sabotaged as soon as they were undertaken. When Atal Behari Vajpayee took the bus to Lahore and Kargil happened, the now departed former Prime Minister had said in dejection: “I took the bus to Lahore and they gave us Kargil.” When Modi dropped by for Sharif’s family function, Pathankot, Uri and Nagrota happened. And now that Sidhu sees “infinite possibility” in Imran Khan, he forgets the basic premise of the failed state that is Pakistan: “a civilian government is always a puppet in Pakistan while army and generals are its true masters.”

Peace between the two nation stands no chance till Pakistan’s Inter-Service Intelligence (ISI) stops its agenda of bleeding India to death by million cuts. Imran Khan is no better than a sitting duck for doesn’t Sidhu know the fate of Nawaz Sharif? Here was an elected Prime Minister of a civilian government who was ejected from office by the Supreme Court without any trial or conviction at army’s behest! Modi’s dropping by in Sharif’s function probably sealed the latter’s fate: for Pak army’s unwritten mandate doesn’t allow you to get too close to India. The one other elected Prime Minister, Zulfiqar Ali Bhutto, we all know, was hanged to death in 1979.

If anything, Pakistan of today is far more vicious than one of previous years. For the first time ever, in its recent elections, many “terrorist groups” were mainstreamed in the form of political parties. One terrorist group in particular, Tehreek-i-Labbaik, bagged two million votes. Terrorists are being legitimatized by Pakistan and it has direct repercussion on India and its internal security. Our soldiers everyday are losing lives in Kashmir; and “peace” gestures, as one by Sidhu now, are limp, stupid and irresponsible.

And the “friend” Imran Khan by whose name Sidhu swears today, has Brig. Ijaz Shah in his team who, lest anyone forgets, is the one who has been the handler of Hafeez Saeed, the mastermind behind 26/11 Mumbai attack. It was Shah who arranged for Osama Bin Laden’s cover; it was Shah who helped Daniel Pearl’s murderer. Shah is a member of core committee of Imran Khan’s party, Pakistan Tehreek-e-Insaaf. Ijaz was extremely powerful as chief of Intelligence Bureau (IB) during the rule of Pervez Musharraf.

It’s unlikely that Sidhu sitting next to chief of Pakistan Occupied Kashmir (PoK) was by accident. The “friend” he admires actually used Sidhu for his own political and propaganda benefit. Sidhu walked into a trap to the great embarrassment of his own party Congress and to the consternation of millions of his own countrymen.

And the facilitation of Sikh pilgrims to gurudwaras in Pakistan is such a lolly which has no basis to cheer. There are hardly any Sikhs and Hindus left in Pakistan; and the “drug menace” among Punjab’s youths has a direct corollary with Pak’s ISI. Yet Bajwa’s words were good enough for Sidhu to offer a big “hug” to the man who is behind most major internal security threats to the country.

Pakistan is only worthy of a dialogue and peaceful overtures once there are visible signs that terrorism is being reined in from across the borders. Otherwise we have a serious enemy in our neighbour who doesn’t mean any good to India. Our all peaceful gestures are no better than sign of weakness to them. Sidhu at best has been a “joker”; at worst one of the “aman” brigade who are intent on keeping India a soft state. He is no one’s darling to millions of Indians today.