Soldiers have done their bit with lives; what are we doing for our India 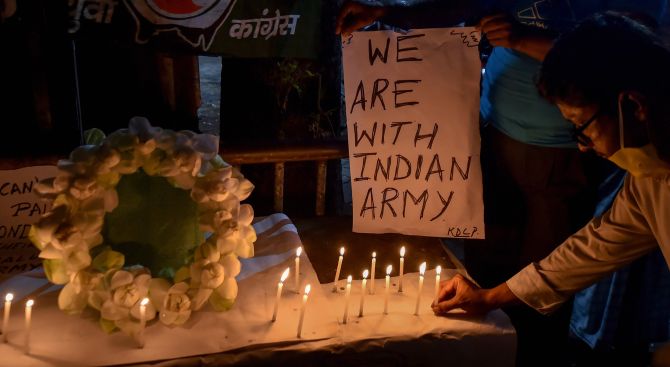 All of us are grieved for our dead soldiers in Ladakh. That all of us want a retribution. That the government is literally closing doors on Chinese telecom equipment which enjoys one-fourth of Indian market. That the Confederation of All-India Traders (CAIT), claiming to represent 7 crore traders, has called for a boycott of Chinese products. That the Prime Minister Narendra Modi and Foreign Minister Dr. S. Jaishankar have used the language the nation wanted to hear.

Most of us have also resolved to boycott Chinese goods. It’s also dawning on us though that it’s easier said than done. I mean our mobile phones run on parts supplied by China. Our consumer goods, electronics, toys, furnishings, textiles, luggage, watches, kitchen items, footwear and frozen food etc bear Chinese imprints. We are also heavily reliant on China in pharmaceuticals and automobile sectors. There are thousands—yes, THOUSANDS– of products we import from China. Our supply chains rely on China. Where do we start and where do we end?

If this is unnerving, you could forward the argument that the Chinese entrenchment in our system is creating millions of jobs in trade, kirana shops and logistics. That there is much ado about nothing since our exports matter only two per cent to overall China’s buying. That India’s loss would matter little to China which has economy five times ours size. Besides, how do I throw out my “Ganesha” and “agarbattis”?

Thus we want our government to hit China hard; we watch our soldiers to spill their blood in inhospitable terrains; we appeal for funds to be raised for the martyrs’ families; we dominate hashtags on social media with our outrage but we don’t—or can’t—do anything else. We could urge boycott of China’s goods but please excuse us from doing it ourselves. There is one thing we want from the nation; quite literally the other we do in practice. We want our soldiers to make the ultimate sacrifice but won’t allow that little pinch in the pocket. Can a nation survive without the cost paid by its citizens?

The Confederation of All-India Traders say there are at least 3,000 Chinese products we could easily replace with our own. If you can’t put away your mobiles, make sure you aren’t buying out-and-out Chinese brands. In case of an IPhone or a Samsung, the profits go to those companies and not to component-makers in Shenzen. Besides, what does it take to delete at least Chinese apps from your mobile phones even if you swoon over tik-tok?

China is today only doing what superpowers have done all through since the Industrial Revolution. You loan out a huge amount to a poor or developing country on very generous terms and with a long window. When the debt becomes unpayable, you extract your pound of flesh in form of a nation’s resources.

That’s what China did with Sri Lanka who now has surrendered the critical Hambantota port which is such a critical military advantage to China overlooking India. It did the same to Djibouti which was forced to allow China a military base on its land. Angola is paying through its nose with crude oil on the debt it’s unable to service as per terms. Kenya is on the verge of defaulting on China’s loan extended for a railway link between Mombasa and Nairobi. It could soon be parting with its Port of Mombasa. South Africa is fearing a similar debt trap. There are endless such instances in Latin America, Europe, Asia and rest of Africa.

I am sure none of us want India to suffer a similar loss of sovereignty. That we want this trade disadvantage of $50 billion to be reduced to a nought.  That we are virtually funding China to hurt us. That if we boycott the Chinese goods we could, it would reduce the trade imbalance by $13 billion in 2021.

Sure, we want Modi government to stand by us with tariff and non-tariff measures. That it must call out China which subsidizes its products, under-prices it, and makes our traders and manufacturers uncompetitive. Our government does—and could do more—to cushion our exporters. That self-reliance–Atmanirbhar—would create products, supply chains and jobs in due course. After all, in this Corona pandemic, we did manage with our supply chains and various local productions did come up.

Let’s not fool ourselves that Indo-China trade is beneficial only to us. It matters hugely to China. There are any number of investments it makes in India through the back channels of Hong Kong and vessel states. That’s why India has decided to screen direct foreign investments. That’s why India has chosen not to be a part of RCEP (Regional Comprehensive Economic Corporation) which would have only rerouted China’s gains. That’s why India has refused to grant market tag to China as neither its’ banks nor pricing is independent of this Communist state. The Modi government is showing its spine: We need to show ours.