Sorry Khurshid, your “Hindutva” card is beginning to sound a badge of honour 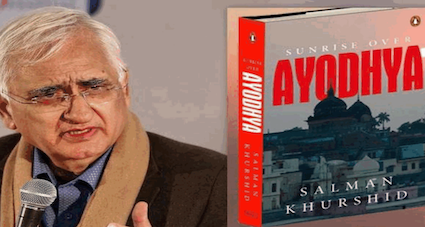 No one demolished Babri Masjid.;

No one lynched Pehlu Khan and Akhlaq;

No one killed women and children in Naroda Patiya in 2002;

No one raped girls in Unnao and Hathras;

No one burnt homes in Muzaffarnagar;

No one killed Ishrat Jahan;

No one mowed down farmers in Lakhimpur Kheri;

And of course no one killed Gandhi.

No one Partitioned India;

No one did “Direct Action Day” in Bengal;

No one caused Malabar Riots;

No Razakar was involved in Hyderabad genocide;

No one did Fidayeen attacks on Raghunath temple (2002);

No one attacked Akshardham Temple (2002);

No one did Godhra;

No one did post-poll violence in Bengal;

No one did Palghar;

No one killed Kamlesh Tiwari;

No one has now done Amravati:

And Will Durant never wrote that the “Mohammedan conquest of India was the bloodiest story in history”.

His education in Oxford University, family lineage, and accounts of history never told him Hindus were anything but an object of repression and brutality in their own land for over a millennium.

Born in Aligarh, he breathed the very air of Islamist supremacy which yanked out one fourth of India, never mind the Hindus were over 80% in numbers in 1947.

India was their land; is their land; would remain their land—“Ghazwa-e-Hind” (Prophetic Battle for India)—was bred over generations before 2014 happened and Hindus rose from the ashes.

And thus has begun the denial from India’s elitist Muslims—Javed Akhtar, Hamid Ansari and Khurshid etc—as well as from average faithfuls who value Adab, Urdu and Achkan as a distinctive class over crawling lives of Hindus meant only to be looted, raped and killed.

So dominant has been their control that under the Waqf Act of 2013, they claim Taj Mahal as their property; some six lakh acres of land belongs to them, second only to Railways and Defence in this country.

Under this Act, they only have to say “This-is-Waqf-property” for the case to be pushed into dispute with the onus on the other party to plead his case in Waqf tribunal board—It’s beyond the mandates of even High Courts.

Now stray incidents occupy the mainstream discourse courtesy India’s despicable media which allows a Khurshid to compare “Hindutva” to ISIS or Boko Haram; about India’s lost “secularism” never mind these seculars won’t tell you how an Ashraf views a Ajlaaf or Arzaal.

This propaganda worked as long as Hindus had no voice and certainly no platform as social media is today. Now the word is passed; the duplicity of this matrix is under a hammer and worse this “Hindutva” card is past its expiry date.

If Hindutva is not Hinduism which they have painted as no more than peace-loving, mantra-chanting, ahimsa-following, vegetarians who believe in renunciations and sit under a tree in search of Moksha, then so be it.

Behind the best of manners of these Islamists is a wolf in a lamb’s garb. Their NGOs allegedly swindle funds in the name of physically challenged; they chant “azadi” slogans (below) while swearing allegiance to the sovereignty of India; they muzzle press while taking vows of press freedom.

You would never hear them speak about repression of women in their community; the despicable treatment dished out to low-caste Muslims; the hostage their laws have made to the dream of Uniform Civil Code (and he was once India’s law minister); the appeasement and subsidies which come their way. The terrorism in Kashmir or Bengal; the fleeing Bengali Hindus or Kashmiri Pandits, don’t wet their cheeks.

Sorry Mr Khurshid, your clipped English; three-piece suit, glibness and five-star manners don’t connect with this country. We see you no different than the invaders who came in the guise of piety or who landed on our coasts with the word to civilize us. Our Prithviraj Chauhans and Nawabs of Bengal were fooled; and Gandhi remained beholden to you despite Malabar Riots; and we didn’t see the bigot in Jinnah who wore the Islamist cloak to achieve his megalomaniac dream; and we didn’t see the Islamist elitist in you.

And if Hindutva is your card, many wear it as a badge of honour today—and men like you could take the credit for it.