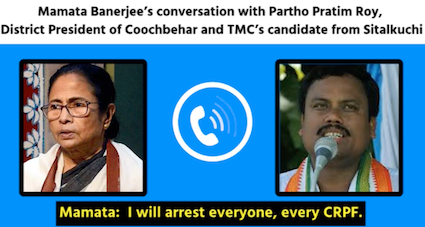 Bengal’s chief minister Mamata Banerjee had gone berserk after the Sitalkuchi incident in which Central Industrial Security Force (CISF) had to open fire in self defence, resulting in death of four on April 10, the day of polling in fourth phase in the state.

An audio is now in public domain, right on the eve of the fifth phase on Saturday, where Banerjee is allegedly heard conversing with the Sitalkuchi Trinamool Congress candidate Partho Pratim Roy, instructing him “not to dispose of the dead bodies” till she arrives next morning (April 11) and that she would do rallies with the corpses! Damningly, she is heard saying that she would arrest everyone, including “Every CRPF (personnel)”.

“I will arrest everyone, every CRPF. Keep the dead bodies for now. Tomorrow there will be a rally with the dead bodies. Tell the families today that no one will take the dead body,” Mamata is allegedly heard saying.

The conversation is scary and upsetting for a sitting chief minister is looking to cause trouble and mayhem in her own state, promising to “frame SP” and “frame IG (police).”

And making a public spectacle with “dead bodies,” with complete disregard to last rites which people follow on the day of a family tragedy, irrespective of their religious proclivities. If it had come to pass, and if Election Commission (EC) had not barred her and other politicians’ presence for three days in the constituency, the consequences are too scary even to contemplate.

During the telephonic conversation, Mamata is also heard stating that “police will not take a statement today,” which tends to confirm the suspicion that state’s police is not independent and works at her behest, a charge which her opponents levy every day.

Towards the end of conversation, Mamata allegedly mentions “They are doing this so that they can implement NPR & build detention camps.” It’s a damning admission that the constituency is infested with infiltrators. NPR (National Population Register) is about the record of legitimate citizens of the country.

Banerjee who had a day’s ban slapped on her by Election Commission (EC) for her speech on Muslim votes and “objectionable” remarks on Central Armed Police Force (CAPF), appears intent in the audio to rouse emotions in the midst of a poll without a care to the consequences to her own people, and disregarding to the Constitution of India.

Banerjee has suffered a series of credibility blows in the last few weeks. There was this “injury” to her leg during the day of nomination filing in Nandigram which was initially blamed as “attack” by her party but the EC later found it to be an “accident.”

Then there were videos surfacing in public domain where she is seen swinging her “injured” foot freely, raising speculation that she continues to be wheelchair-bound to get sympathy votes.

Further, there was this incident on the polling day in Nandigram where she stayed put in a polling booth claiming that her polling agent wasn’t allowed inside the booth which EC later found to be a false charge.

Below is the transcript of the conversation between Mamata Banerjee and Partho Pratim Roy which is as follows:

Mamata: Keep calm and get the votings done, then we will judge.

Mamata: Everything will be fine. Keep calm and get the vote done

Mamata: Forget what is happening, they are doing this so that you lose the election.

Partha Pratim: I am in the field.

Mamata: Who did this? CRPF?

Mamata: Who are those people?

Partha Pratim: They are our people.

Mamata: These are our people! You do one thing lodge a FIR. Take help from a Lawyer, don’t do it by yourself.

Mamata: I will tell you when the family will lodge the FIR after the election.

Mamata: The police will not take a statement now. You have to file a strong FIR and consult a lawyer.

Mamata: So that everything starts from the command zone & the SP will be framed.

Mamata: Concentrate on Votes now, provide strength to the agents.

Mamata: You visit once or twice then go and tell it.

Partha Pratim: I am going everywhere.

Mamata: Tell people that there is no reason to worry about casting votes . They are doing this so that people can’t cast their votes.

Mamata: They are doing this so that they can implement NPR & build detention camps.