Swaraj Kaushal or True Indology’”who do you think is right in this standoff on Mizoram? 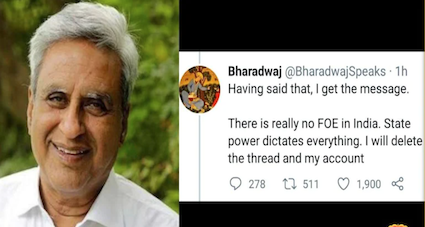 True Indology (now @BharadwajSpeaks) was threatened with “many years in jail” by the Mizoram governor Swaraj Kaushal for running a thread on twitter which “traced” the origins of Mizo people and statehood of Mizoram and quoted a confession of the present chief minister Zoramthanga that he was once the member of a “separatist and terrorist”organization, the Mizo National Front (MNF).

Swaraj Kaushal tweeted: “Probably you know the consequences of what you are writing. One FIR and you would spend many years of your life facing trial.”

Now let’s look at the respective position of the two and take our own call. @BharadwajSpeaks wrote a thread on twitter (below) in the background of six Assam’s policemen being killed in Mizo police on a border dispute.

“Mizos has conflict with other states on its border. Originally Mizoram  was a district in Assam by name “Mizo Hills.” And that till 1952 it was known as “Lushai Hills” since there was no mention of Mizo or Mizoram till the early 20th century. The region was inhabited by HIndus (Reangs) and Buddhist (Chakmas) but “Mizos” came into prevalence as it represented a collection of distinct tribes such as Lushai, Kuki, Paite and Hmar. They came to India only in the 18th century. Mizo historians identified this place to be present Silung in South East China.

“During Independence, a group “United Mizo Freedom Organisation” came into being. They wanted the region to be merged with Burma and not India. When their demands didn’t make much headway, they formed Mizo National Front (MNF) in 1966. Their aim was to kick India out of Mizoram through violent means if necessary. MNF received training and funding from Pakistan’s ISI. The present CM, Zoramthanga, was a member of MNF. During the Mizo insurgency, Hindu Reang (Bru) were kicked out of Mizoram. They are still living in refugee tents in Tripura.

“Mizo insurgency lasted for two decades. The MNF gave up militancy after the Mizo Peace Accord was signed in 1986. In return, India gave statehood to Mizoram; special category to Mizoram; and revoked all criminal cases on MNF, lifting the ban on the group.”

(Here is the link to thread but it would be deleted now that @BharadwajSpeaks has deleted his account).

Mizoram governor Swaraj Kaushal (@swarajkaushal) was beside himself on the thread of @BharadwajSpeaks. His position came because of his association with the region for 42 years and he played a critical role in ensuring the Mizoram Peace Accord in 1986. This is how he made his point on twitter:

“For seven long years, day and night, and without a single rupee as fee from 1979-1986, we went house to house convincing political leaders that dialogue was the only way to stop bloodshed. (But now with your tweet-thread) You do not know what you are doing. You do not know the consequence of the venom you are spewing. It has the potential to jeopardise peace in Mizoram. (He) doesn’t seem to have read the Mizo Peace Accord.”

Swaraj Kaushal then quoted an instance to drive home his point.

“You must be aware of the Heer-Ranjha story. It is part of our folklore. Heer belonged to the Syal clan. Sialkot is named after them. The Hindus and Muslim Syals do not allow anyone to sing Heer-Ranjha in their area or in their presence…same way no Mizo will ever listen to anything of the kind that was written. There may be conflicts between one tribe and the other. It is there is all societies and regions. Yet we must keep the country together. Rashtra Sarvo Pari!”

Who do you think is right in this raging battle on social media? There is @BharadwajSpeaks on one hand who has been a shining light in countering the anti-Hindu forces on twitter, truly a legend. On the other hand there is Swaraj Kaushal who shed his sweat, tears and years to embed Mizoram into India and quieten the insurgency which raged till a generation back in NorthEast. There is no point underlining the importance of NorthEast to India’s security: if it is cut-off, China would love it in its bid to gobble up Arunachal Pradesh, and no less because insurgents in Bangladesh and Mamata’s Bengal would love a similar situation, India would be burning up from the edges.

A few things are unmistakable in these two competing positions. One, that @BharadwajSpeaks probably has truth on his side. Yet in these days of raging emotions, least should be done to inflame it in national interest. Swaraj Kaushal, through his tweets, conveys his admiration for @BharadwajSpeaks, wants him back on twitter, yet senses anti-India forces would use @BharadwajSpeaks twitter thread to inflame trouble in NorthEast.

We all are free to take our own call on the matter.