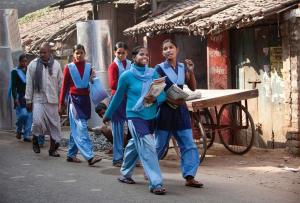 Strange but scientists believe it is true.

Watching television is the best way to control population is the evidence from southern Indian states.

Figures don’t lie and here it is : Andhra Pradesh, Tamil Nadu, Kerala, Goa, Karnataka and recently Telengana add the least numbers to India’s population which is presently 1.27 billion and set to overtake China (1.39 billion) by 2050.

Scientists and sociologists have racked their minds on the issue, viewing it from as divergent parameters as possible.

Could it be education which is behind this North-South population imbalance? Initially studies favoured the notion. States such as Kerala and Goa have wider literacy compared to poor education levels of Uttar Pradesh and Bihar. However Andhra Pradesh has low female literacy compared to Meghalaya and Nagaland and yet far lower fertility rate.

Is it women’s higher economic development behind this imbalance? Again figures don’t support it. Andhra Pradesh is not a prosperous state compared to Gujarat yet the latter has higher fertility rate.

Could urbanization be behind it? Again figures buck the opinion. Kerala is not urbanized yet its’ population growth levels are low.  Mizoram, a rather urbanized state, has higher rates.

Could electricity provide the clue to population growth rate? After all, the entire southern region of India is almost fully electrified. Yet Nagaland and Chattisgarh, have high levels of electrification and still have high birthrates.

Finally television seems to provide the answer. LiveScience has published a report which states that television improves the social position of women and causes a decrease in birth rates. According to Robert Jansen and Emily Oster who after three years of study provided the intriguing report, television reduces domestic violence against women and preference for son. It also increases women’s autonomy and decrease in fertility. Women tend to take more household decisions which also, in turn, boost school enrollment for younger children.

Evidence is palpable. Andhra Pradesh and Jammu and Kashmir (1.8)  have high levels of TV penetration and also lower fertility rates as is the case with West Bengal (1.7).

Such a thesis is supported by figures from Brazil. The south American country had as high as 6.25 fertility rate in 1960. It was 1.81 in 2011. Television is said to be the reason behind this drop in fertility rates.

Africa, on the contrary, will double its population in next 38 years. It’s population growth, presently 1.111 billion, has been astounding. Nearly 6 children per household is the norm. Now Africans do have a high penetration of television sets in their living rooms but all it broadcasts, mostly anyway, are sports.

Maybe more soap operas and family-oriented TV serials can help the African cause.