Thank God Congress-JDS; for there is Indian Express 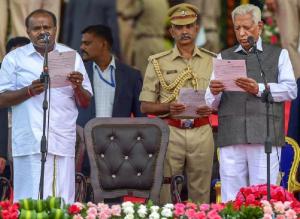 The “fake news” in our mainstream English dailies is a slow poison. This venom seizes our brains; paralyses our actions, manifests itself into a kind of plague. This wind is then seized by off-shore forces which then returns with terrifying ferocity and sinks truth into a bottomless pit.

The expansion of H.D. Kumaraswamy’s unholy government in Karnataka on Wednesday was one such news.  Karnataka is important to Indians in many respects: it’s a template for opposition unity; alligators and hippos sunning together. The 6.41-crore people of the state have suffered a thousand cuts; being treated no better than cattle. First, made to lock horns; then kiss each other’s butts and finally, left to numbness inside a deep freezer. A 37-seat party chief was hoisted as Chief Minister in a 224-seat state. All in the name of “saving democracy.”

Now look at how our mainstream English dailies have gone about their task on Thursday. Nearly everyone has headlined: “expands cabinet”. What cabinet? What expansion? Who all were there in the first place to merit the tag “expansion”? And all without portfolios?

Indian Express, which specializes in making dead bodies appear kissable, unsurprisingly took the cake in its “fake news.” It spelt out all the data: how many ministers, how many Vookaligas, who Lingayat, who Muslim, who woman, who Dalit in the “expanded” cabinet. What it skillfully hid from its readers’ view is that the event marked an open revolt among senior Congress-JDS leaders. No mention, not even a vague line as its comrade-in-arms The Hindu casually slipped in: “(it) triggered protests by the supporters of the ministerial aspirants.”

So Indian Express didn’t know about the protests. It didn’t know that HK Patil, who won the Gadag assembly seat, a minister in the outgoing Siddaramaiah government, hailed as  “Tiger of Hulkoti” has openly rebelled? It didn’t know MB Patil, former water resources minister, said after the swearing-in ceremony on Wednesday: “I will call on the former Chief Minister Siddaramaiah and Deputy Chief Minister G. Parameshwara to know why I was not included in the Cabinet…my self-respect is hurt.”

Three-time MLA from Hirekerur, BC Patil said: “MLAs who indulged in blackmail politics and those with money power have been given Cabinet berth.” Patil, an actor, producer and director, has said he would consult his constituency before taking next course of action.

TB Nagaraj, MLA from Hoskote, BK Sangameshwar, from Bhadravati, too criticized party leaders, threatening to quit party, if he didn’t get a “suitable post.”

B. Satyanarana, MLA for Sira, said: “My name was on the list till last night…I am very much pained.”

Senior leader AH Vishwanath, for Hunsur, remarked: “I won’t accept the post of the Deputy Speaker (even if it comes my way).”

These are just a few MLAs. Trust me, I am leaving out almost as many who are protesting and dissenting as I have mentioned.

(As an aside, do any of your readers remember what happened to BJP’s call for a day’s strike on May 28 in Karnataka? Well, it couldn’t go ahead as Kamal Pant, ADGP, Karnataka, had put his foot down: “Calling for a bandh is illegal.” You are unlikely to have read it in your morning’s newspaper.”)

So tomorrow, when these dissenting MLAs quit, and the Congress-JDS alliance is in minority on the floor of the House, these very presstitutes would go to the town, claiming “murder of democracy.” Rahul would decry Modi-Shah duo for their fascist tendencies. The New York Times would comment that Indian democracy is subverted. Archbishops of this country would worry about the sanctity of Constitution. The “Mombatti-gangs” would hold protests around the country. A few former Election Commissioners, Chief Justices would write sanguine pieces in edit pages of “journalism of corrupt.” Randeep Surjewala, in his irritating high-pitched tone, would chew out such words: The nation can’t take it any more.

But then, be beware of the strike of the silent. You all are out there in open in your full glory. The sight is not pretty for the citizens of this country. Your echo-chamber would be of little use. Down you must go. All.

(You must know another update on “Mahagathbandan”: Mayawati and Akhilesh skipped the Iftaar Party which Rashtriya Lok Dal (RLD) had thrown on Wednesday. Even as celebrations of Kairana win are still on).