Thank god, Not all Indian Muslims think like Asaduddin Owaisi 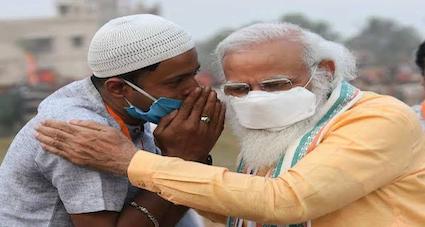 It might be paying Asaduddin Owaisi of AIMIM to keep his diatribe against prime minister Narendra Modi going at all times but thankfully not all Indian Muslims have a disposition like him.

A few days back one image had caught everyone’s attention in which a Muslim man could be seen whispering into Prime Minister Narendra Modi’s one attentive ear after his rally in South 24 Pargana district in West Bengal.

While nobody knew the identity of the man, people over social media speculated a great deal on what he could have said in Modi’s ear. The one of Owaisi hogged limelight though. Attempting a guess, Owaisi said in a video:

“Modiji, I am not a Bangladeshi… He may have said Modiji we will not show papers for NRC/ NPR… He may have said, Modiji, we do not back Triple Talaq law… Or, he may have asked the PM – when will you wear a cap like me.”

What was the man in a skull cap whispering in @PMOIndia’s ear?pic.twitter.com/RRimiQ4JEi

The man now has been identified as Zulfikar Ali. As he was prodded by a channel on his brief moment of fame with Modi, the young man spilled out his conversation with the prime minister.

“I am a Muslim and I want NRC should be implemented in the country,” Ali said.

“If I would ever get 30 minutes instead of 30 seconds to speak with PM Modi, I would say please implement NRC. I am saying this from my heart. Traitors who are residing in our country should be sent out. It is beneficial not for us but also our children.”

If people from Bangladesh, Pakistan, or other countries will live here, then where we will live?” he added further.

Zulfikar Ali from Bengal became famous overnight when his picture where he’s whispering something in PM Modi’s ear went viral on social media. Listen to what this young Muslim has to say about his experience with the Hon’ble Prime Minister Modi ðŸ˜ŠðŸ™ðŸ½ pic.twitter.com/KU5e32VrXJ

He said that his family come from a humble background and have all the documents. “CAA or NRC is a matter of worry for those who are staying illegally here without any documents.”

When asked about what he said in the PM’s ear, he said he caught Prime Minister’s attention when he saluted him while others that were standing there greeted him with folded hands or ‘namaste’

He further said that it was PM Modi who initiated the conversation and asked his name and what he wants to become? It was then he told him that he doesn’t want any post of councilor or MP, rather just wants to click a selfie with him.

While speaking, he also shared that he wants to say to all his Muslim fellow to stay neutral towards the prime minister.

He also added he doesn’t care if he will be murdered tomorrow for speaking in favour of PM Modi, his children will be there for this country.

“My father worked for the country, I am working and will do more, and my children will also do”

When asked what he feels when people say that Bharatiya Janata Party or PM Modi is communalist and promoting Hindutva ideology, he bluntly said that other than BJP no other political party has the guts to say that they consider everyone equal.

“BJP says we support Hindus but they have never said that we are against Muslims. They say, ‘Sabka Sath. Sabka Vikas. Sabka Vishwas”

He explicitly asks, “Can any other leader say that?”

He further challenged the West Bengal chief minister Mamata Banerjee and said, “Can she say that if she wins the election, the next chief minister in the state will be Muslim? She cannot say that.”

He also reveals that he has a wish that he wants to go across the border and shoot Pakistani Muslims who rape and kill our mothers and sisters.

Apart from that, he was overwhelmed by his meeting with the PM and said he will always cherish this moment and the memories will stay with him forever.

“I will remember those 40 seconds for 40 years. My children will also remember these moments.”