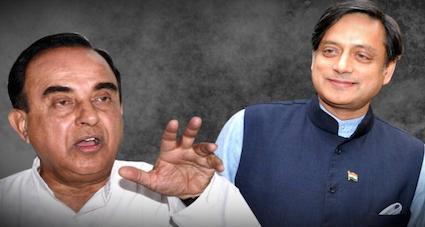 They take a fair bit of your mind and money—this is the time to dump them for good.

When a Shashi Tharoor tweets that India could be standing on the “wrong side of history” on the Ukraine Crisis, abstaining in UN, tell him that you were the minister when your UPA government legitimized Russia on Crimea in 2014.

If you must, ask him which side of history India was when it embroiled J&K in UN; enjoined the Sri Lanka-Tamil issue; and sat on its bum when India’s Kashmir land turned a freebie between Pakistan and China.

Or how history would’ve looked to him if the US’ 7th Fleet in Indian Ocean during the ’71 War wasn’t dissuaded by the Russians?

We also have Dr Subramanian Swamy, totally discredited today after being spurned by the BJP, telling us that the US wouldn’t take kindly to India’s association with Putin.

In essence, Dr Swamy is telling you that if China uses Burma or Bangladesh as its forward base, India won’t have support from the United States like the one latter is presently offering to Ukraine—read zilch!

This man won’t tell you that the support of West he is counting upon—your US, UK, EU etc—were ambivalent when China did the LAC transgressions in Galwan, eastern Ladakh and Arunachal Pradesh.

We have Asaduddin Owaisi, implying that China could use the example of Russia—and violate our territory. “There are choices we make…and we must recognize the consequences.”

So we side with Ukraine which supports Galwan violation; oppose repeal of Article 370; and supports Pakistan for the UN Security Council seat. The one which sided with the world against us when we went nuclear.

Indian Express is frothing in the mouth, nudging India towards Ukraine and how this “tightrope”, along with “West’s pressure” is making things “tighter” for India.

Even as they talk about West’s pressure on India, the Modi government has   cancelled the purchase of multibillion dollar worth of US’ Predator drones, right in the middle of Ukraine Crisis.

So much for the “West’s pressure.” The same pressure which amounted to nothing when India bought S-400 missiles from Russia despite West’s threat of sanctions.

None of them would tell you that’s because India is making such drones at home now. That our defense exports now range over 75 countries.  That over 70 per cent of our defence budget is reserved for domestic industry.

Look at the timeline of various OpEd writers for Indian Express who are stuffed with favours from the foreign think-tanks, mostly US-funded.

So we have Pratap Bhanu Mehta today, bemoaning India’s weakness, in the newspaper’s OpEd page, he says India is not standing for a “rules-based world order”, and that Russia’s invasion is the “most-egregious violation of international norms at hand.”

Sure, he didn’t do any such moral grandstanding when Donetsk and Luhansk were being shelled and its citizens lived under the shadow of death for eight long years since 2014. You won’t find him bristling with anger at the lack of rules-based world order when a United States bombs Somalia or Libya or arms rebels in Syria.

India is not succumbing to Russia—instead it has abstained from the resolution vote in the United Nations for “dialogue” wasn’t pursued which Putin had offered all along before his military operations. It has put itself in Russia’s shoes on how it would react if Nepal, Burma, Bangladesh were being used as a “client state” to wage “proxy war” in Indian territories.

India doesn’t need the United States as much as they do India—for they know in any war against China, the US would need logistics support and launch-bases from us. They would need our support.

Listen to what US itself conceded only yesterday: “We know India has a relationship with Russia…including in the defence and security sector…that we don’t have” (Ned Price, US spokesperson).

It is India which is for rules-based world order, respecting the sovereignty of Russia which was being blatantly violated by the West and NATO through its “proxy state” Ukraine.

In a similar situation, if Nepal pricks India by hurting our people in its kingdom, at the behest of China, would India be guilty in sending across its troops and violating the “so-called” sovereignty of Nepal?

True, India has much to worry from Pakistan and China at its two flanks. But any West-like misadventure—say in Punjab or Jammu and Kashmir, or in Arunachal Pradesh—and India is good enough to engage them in a conventional war. The cost would be mutual as it would be in a nuclear option.

But here is the thing: Imagine the kind of muck we put up with from our politicians, press and propagandists on payrolls. They don’t worry about you or India, as long as the groovy train keeps chugging along.

If anything stand up and applaud the Modi government on its stance on Ukraine.