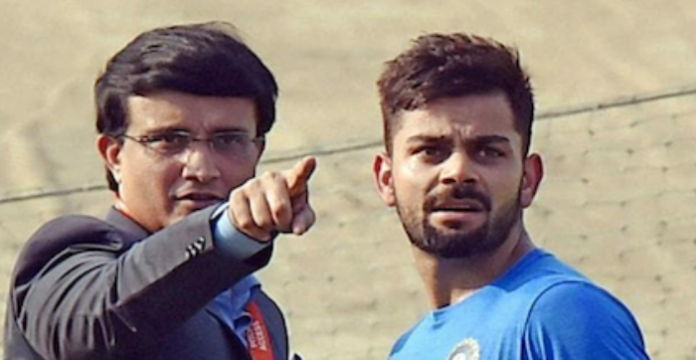 There is no pretending that Indian cricket board and its team’s supremo Virat Kohli have anything more to share than public decency. And it doesn’t bode well if both are in a hand-combat to pin the other down.

Reports have emerged that Anil Kumble is a handshake away from being the head coach. He is a cricket legend who was warmly welcomed by Kohli and almost as soon put out of sight for reasons that are not unknown. Kohli was more on instinct, Kumble was more on preparation and before long the latter’s fences had been torn down by the snarling nostrils of a rampaging young bull who had seen red. That was 2017, Kumble who had replaced Ravi Shastri was being displaced with the same man and it’s now 2.0, a sequel in reverse.

There is something about coaches which is tetchy to board president Sourav Ganguly. The Prince of Kolkata himself had built a young team, much like Kohli, and he was inconvenienced by coach Greg Chappell whom he too had welcomed with open arms and indeed dragged him out of his chair from somewhere in Bradman’s land of Adelaide. Then 2007 World Cup happened, the team’s seniors found words in torrents and Chappell became a history best forgotten.

We are nowhere near the situation where Kohli has been replaced as captain as once Ganguly had been. But the present is of the same trajectory: Chappell unhinged by a deferential Indian board, the team along with the captain put out to pasture, and Indian cricket more a staple of front pages usually reserved for politics.

Again, the administrators and the cricket general are not on the same page. Both are circling each other: The administrators playing coy when the team needed replacement of Shubman Gill and Mayank Agarwal during the England series; dusting off Dhoni now as if Kohli on his own was not enough in instant cricket. Kohli, arguably tizzy with what he had achieved in England, despite his lame batting; stung that India’s limited over triumphs amounted to nothing for the lack of a mere silverware. Instead of vindication, he possibly saw a snub in Dhoni. It’s unlikely that Kohli resents Dhoni; but rather the hand that moved that puzzle on the chessboard.

Who do we define as cricket board here? Jay Shah or Sourav Ganguly? Or both? The pieces as they are on the board could go either way. Kohli is secure as Test captain; he probably has pre-empted his T20 removal and has measured that it would take a mad man to remove him from ODI captaincy before 2023. As a Test captain, it would be downright looney if a man credited with exploits in Australia, and I am not forgetting Ajinkya Rahane, is held down in a palace coup. Kohli’s T20 step- down could be no more than buying time for every board administrator these days have a shelf life.

So please use Kohli’s tweet on his T20 future as a soiled paper worth no more than the sprout chaat it carries from the stall outside the maidan. It would be naive to think that Kohli left the stage for the space he needed for his batting when a T20 bilateral series is never more than a week’s length. As for T20’s approaching big event, he is still the big man isn’t it. Who knows how the pieces are  in a year’s time? And if today’s T20 knight-in-waiting, Rohit Sharma, isn’t mindful that he still is answerable to his benefactor in other formats.

Was it all necessary? These manoeuvrings for control? Virat would say his instincts about the team environment is borne out by the intensity his boys reserve on Ovals. The Board could say he wasn’t in Dharmshala (Anil Kumble) or in Melbourne (Ajinkya Rahane) and such is the wealth of team’s reserves that it carries a captain alongside in auto mode.

The truth is both are stepping into each other’s domain and that’s wrong. Kohli could’ve been more discreet on Kumble in 2017 than make a spectacle of him in the midst of a global event. Nobody deserves a public humiliation, less so a game’s true legend. Board could’ve put Indian cricket above self and rejoiced only in the upward trajectory of the game they govern. Both ought to have stood up for each other’s sovereignty then step on to each other’s lawns.

Board administers the game. PERIOD. It decides on the set-up and would hate its hands being forced by the men it chooses, like it possibly was in Manchester. It’s a shame how it’s been swept under the carpet by those who comment on the game, as well as those who govern it like International Cricket Council (ICC). The fear of Covid-19 was a nonsense and amongst the three top characters, England board certainly wasn’t a party. Between Indian board and its megastars, the component of crime could vary in degree. But both were complicit in that absolute disgrace.

Or is it a third force which is calling the shots in Indian cricket to which both administrators and megastars are in thrall? Indian Premier League (IPL) is a behemoth now, a dog which is carrying along the master and his leash. It’s unstoppable in Elections or Covid; unhindered by the absence of dates in a calendar. It would still be played on sand or water, with players in trunks and cheerleaders in bikini, its matches rearranged somehow even if Bengal or a Kerala were to become a new Pakistan and Bangladesh on a blood-soaked day.

To me, all this is very distasteful. I have marvelled at the present Indian team and it’s Kohli who has worked up this mix. You can’t take that away from him. But I also would like the board to control its stable lest another Manchester happens. Unless of course both of them were doing the bidding of moneybags. If all that I have written is in the realm of conjectures, than Indian cricket is above greed or ego which we know is never the case with empires and emperors.