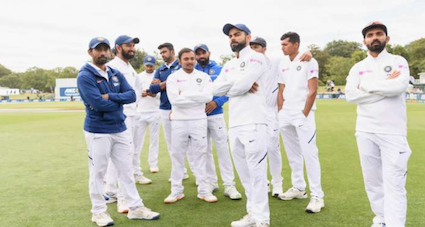 The team went to England for the World Test Championships (WTC) finals on June 3, quarantined either side of the departure before they took on New Zealand on June 18 without a serious hit in the middle. It was a recipe for loss, never mind how good you were in the kitchen for two years, even with burdocks, that made gluttons out of anorexia-ins.

Then you are banished from public memory for 42 days, alternating between pubs and eateries and night clubs before flopping on a friend’s bed or in hotel. The world wakes up when one of you—Rishabh Pant—tests positive, a biggie who did in Australia what 300 other Indian Test cricketers wouldn’t dream even in sleep lest they wake up with uncommon heart-beat.

Oh yes, there was one more wobbly moment when a young Shubhman Gill went down to his injury for good for the tour. It leaves you effectively with seven top-order bats for a five-Test series which still is a fortnight afar, without a serious pre-hit again, enough for a few more to test positive, now that the United Kingdom would break free of lockdowns from tomorrow (July 19).

I won’t bet on a Covid-free Indian team which on a scale of probability is more likely than my wife serving a pudding to a diabetic husband. When the nation is mask-free, the cases are rising in thousands everyday from Ipswich to Inverness and Liverpool to London, when there is no water-tight bio bubble—how do you avoid contamination in lifts—a Covid-free Indian team is the stuff of legends which would never happen—like an 8-For against the bowling columns of Cheteshwar Pujara.

So excuse me, please don’t call it a jumbo team. You have seven each batters and bowlers for the tour, three spinning allrounders and two wicketkeepers, quite a few could return home via a couple of detours in Europe with wives who are smart enough to carry a must-see list of the Continent. The Swiss Matterhorn and Slovenian Lake Bled, you see. Enough to be a presence among friends while your lesser half attends to his torn calf muscle or a broken finger, if not this bloody Covid.

In back-to-back five Tests in a month and a week, in a country where Covid-restrictions are off but visitors are mandatorily quarantined—when have we doubted quirky Englishmen—where effectively you could be left with nine players left standing, asking a Shastri or Arun to pick up what they left a quarter of a century ago; it’s no cheer to millions fans of Virat Kohli’s men.

So it begs a question who’s been taking call on Indian cricket. You don’t need an Indian team to requisition the BCCI, it’s common sense enough for even PCB to nod its head. When has a fast-bowling complement stood up for a full-fledged tour without casualty? And we have six of them. Some would fall by wayside, certainly hors de combat, by way of injury or fatigue, if asked to bowl 40 overs on a flat deck.

Not to forget that these are the very fast men who would be servicing up in nets too as locals can’t be invited in these pandemic times. Batsmen would be served dollies and looking at those confident front-foot strides you would make the mistake of pitching a KL Rahul in front of Anderson and likes at the fresh of an innings.

I heard the rumblings in newsprint that the tourists were looking for a Prithvi Shaw or Devdutt Padikkal as a back-up for Test series. I would’ve added a Bhuvaneshwar Kumar or Navdeep Saini too. If numbers could dwindle, as they surely would, you need young men in readiness.

But either such a request hasn’t been made or heard. Why? Sourav Ganguly cut his teeth in England and he could use his suo moto (on own accord) to SOS a few. Chetan Sharma had his best moment in England in the 80s. Why deprive the team to emulate the ones of 1971 and 1986 when we won series against odds. They were still best-of-three-Test affairs and not the full-blown 5-Test matchups of last two series when we were drubbed 1-3 (2014) and 1-4 (2018).

India today is good enough to send two squads on international tours. We have reached here from a stage of one world-beater to the one where six or seven could win you a game. We score runs on all kind of pitches, we take wickets on all kind of tracks. Our present fielding has washed away the sins of the past. You no longer have players just from Mumbai, Delhi or a Bengaluru. Spin alone is no longer your only arrow in the quiver.

It has earned India a bucketful of respect and awe. And cricketers by truckload. So much so that the men-only preserve is no longer the norm, if your remember the catch of Harleen Deol. And the payback in such numbers that the BCCI is running out of lockers available.

It thus does no stakeholder good if this team isn’t given the best cover to tame the English Lions in own den. The hosts are thirsting for blood after what happened in India earlier this year—pummelled beyond the 12 rounds permitted in pro boxing parlance. Kohli’s men need ship which could sail a wild ocean and not reef boats which stand no chance to sea in swell.

It would be so churlish and stupid to think that masses are no stakeholders of this game. From riches to stardom to life after, every number owes its existence to people. Cricketers are blessed to have fans; and so do the administrators. You don’t disrespect them. India needs to know from its Ganguly and Kohli why it is so what it is so in England. Petty games have no place; individuals don’t stand in the same queue in which this great game does. It smacks of a scandal to me. Shore up the reserves before it’s too late.