Three Indians who are being sought for extradition’”but not by India! 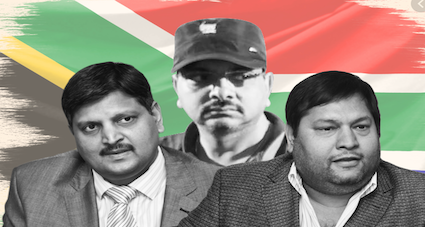 The noose may be tightening around the India-born Gupta brothers, who are wanted in South Africa in connection with alleged embezzlement, money laundering and corruption cases involving an estimated $8 billion.

The South African government has declared them fugitives. The Guptas, who are now said to be living in a villa in Emirates Hills, one of Dubai’s most expensive residential communities, have denied all charges against them and any wrongdoing.

The siphoning of 24 million rand (Rs 13 crore) is the first concrete proof that a South African court has found against the brothers, but it may only be the tip of the iceberg. Investigators in South Africa claim the family, which was once close to former South Africa President Jacob Zuma, is involved in several cases.

Earlier this week, the United Arab Emirates (UAE) ratified an extradition treaty with South Africa, which may pave the way for the Gupta brothers to be sent back.

That came after Interpol issued a search warrant for the three brothers – Ajay, Atul and Rajesh – and a few India-based directors of their defunct companies who have gone underground.

“The Guptas can be arrested from anywhere,” Swetsa Nakumbe, an officer for Interpol, said in a telephonic interview to yours’ truly from Cape Town.

A court in Cape Town has also issued warrants against the brothers.

The Guptas routinely travel to India. But now, with the warrants issued by Interpol and the South African government, international travel will be tough for the Guptas, who fled South Africa in 2018, following charges levelled by a government-backed commission that they had embezzled over $8 billion through business deals that were never cemented in South Africa. Investigations and hearings are on in those cases.

The alleged Rs 13 crore fraud, connected with a 24 million South African rand (SA rand) feasibility study in 2011, has not ruffled the highly influential Guptas. The court took Iqbal Sharma, one of their top aides, into custody after it was disclosed that he had transferred almost 1 billion SA rand (Rs 536 crore) to the Gupta brothers during 2016-18. Sharma is one of 17 people charged with defrauding the Department of Agriculture and Rural Development of Free State province.

The case pertains to the Vrede Farm Project. An order of the South African High Court in 2018 showed that cash meant for poor farmers was deposited directly into Atul Gupta’s personal account, although he had no interest in farming and did not provide any farming services to the project. High-level politicians were also said to be involved in the scandal.

Sindisiwe Seboka, spokesperson for the Investigating Directorate, told me that Nulane Investments, a company owned by the Guptas that was asked to conduct the feasibility study in 2011, had no employees and had subcontracted Deloitte to produce the report. The only change made to the Deloitte report was to identify Paras Dairy as the suitable partner for the development of a milk processing plant in Vrede.

Officials of Ghaziabad-based Paras Dairy said they were not involved with the Guptas and had no interest in doing business in South Africa.

“The modus operandi in the Vrede case has been replicated in other government departments and projects,” Seboka said.

The court also found that the Guptas had hired Bell Pottinger, a top British PR firm, to shift the heat from the family and then South African President Jacob Zuma to the white minority in the country, which still wields considerable economic power. The PR firm created fake Twitter pages that emphasised the power of white businesses and used the hashtag #whitemonopolycapital to inflame racial tensions.

The PR firm, which was eventually expelled, said it was paid a monthly fee of £100,000 by Oakbay Investment, a company owned by the Gupta family.

The Gupta brothers relocated to South Africa from Saharanpur in Uttar Pradesh in 1993, just as white minority rule ended and the country opened up to the rest of the world. Family patriarch Shiv Kumar Gupta sent his sons to South Africa because he believed it was a land of opportunity like the US.

The Guptas have been accused of wielding enormous political influence to advance their business interests in South Africa. Their troubles started when South Africa’s ethics watchdog, the Public Protector, published a damning report in October 2016, saying the state-owned electricity monopoly had awarded a huge coal order to a then-Gupta linked business at well above market prices. The report also alleged that former mining minister Mosebenzi Zwane “travelled to Switzerland with the Guptas to help them seal a deal” to buy a struggling coal mine. Now, those very mines are being put on sale.

Investigations have shown that the Guptas employed members of the Zuma family to further their business interests. Bongi Ngema-Zuma, one of Zuma’s wives, worked for the Gupta-controlled JIC Mining Services as a communications officer. Duduzile, Zuma’s daughter, was a director at Sahara Computers. She began working for them six months after her father was elected president of the African National Congress. Duduzane, one of Zuma’s sons, was a director in a few Gupta-owned companies but stepped down in 2016 following public pressure.

The Guptas often use a private plane to travel across continents, but the Interpol alert could curtail their trips.

The brothers were last seen at the congested Kumbh Mela in Haridwar this April, where some members of the family got into a fracas with the police over access to the holy river, a dustup that was covered by local news channels in Uttarakhand.

The brothers purchased a Bombardier Global 6000 Canadian business jet with a $41 million loan from Export Development Canada, the government-owned export-import bank. The family has paid back only $14 million and still owes the bank $27 million. A report in Canada’s Globe & Mail said Export Development Canada admitted that its $41 million loan to the Gupta brothers for the Bombardier jet was a mistake.

In India, three state-owned banks are said to have had dealings with the Gupta brothers. Investigating agencies claim State Bank of India (SBI), Bank of India and Bank of Baroda (BoB) handled cash that was laundered by the brothers.

BoB, which shut its South African operations in 2014, took a hit of Rs 120 crore, it was revealed during hearings in Cape Town. Officials deposed before the judge that the Guptas routinely laundered cash through shell companies.

Bank of India (BoI) told the Reserve Bank of India it had advanced Rs 23 crore to Confident Concepts and Islandsite Investments, two Gupta companies that have now filed for insolvency. Mails and messages to BoI remained unanswered.

An e-mail to Dinesh Kumar Khara, SBI chairman, asking about the bank’s loans to the Gupta family remained unanswered. South Africa’s main commercial banks have cut all ties with the Guptas, citing risk to their reputation.

Even as they filed for insolvency in South Africa, the Guptas are said to have been linked with other Indian businesses, including a deal with Baba Ramdev’s Patanjali Group to sell ayurvedic products in the countryside.

The Guptas were found in early 2021 to be backing UAE-based Murari Lal Jalan, who bid for Jet Airways even though he had no connection with the aviation business. Jalan eventually emerged as part of a two-member consortium chosen to revive Jet Airways by its creditors.

The brothers also intend to get into the education sector by building a university in Uzbekistan’s capital, Tashkent.

Investigators found the brothers were linked to Indian Premier League creator Lalit Modi, now a fugitive. It was with their backing that Modi shifted the world’s richest cricket league to South Africa in 2009. It was at that tournament that Indian businessmen Ness Wadia and Mohit Burman were beaten up by the private security guards of the Guptas in an altercation during a match.

Now, the law is slowly catching up with the brothers as their scandals unravel across South Africa.

In 2019, German software maker SAP found compliance breaches and “indications of misconduct” in $50 million worth of public sector deals in South Africa involving the Guptas.

In 2018, income tax officials conducted raids in Saharanpur, the sleepy town that was once home to the Guptas, Dehradun, New Delhi and Gurgaon, where the family has offices and real estate property.

After the raids, the brothers stopped construction of a temple in Saharanpur following allegations that it was being built with illegal money brought in by the family. A two-part investigation by News24, a South African news publication, highlighted how the Guptas had created numerous shell companies to launder cash.

(This is a reprint from MoneyControl)