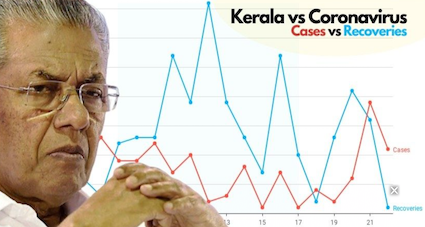 For God’s sake, is there someone who would make Kerala a national concern?

Kerala has shown a 26.5 percent jump this week from the previous one; it’s reporting 100 deaths per day for last 10 days; and it’s causing a spike in neighbouring states of Karnataka and Tamil Nadu. Indeed, Karnataka has recorded a 17.3 percent spurt in positive cases on previous weeks.

Kerala could become a super-spreader of Covid-19 virus across the country but the stakeholders seem AWOL. The mayhem of April-May when the only pictures appearing in newspapers was mortuary and burning pyres, when hospitals ran out of oxygen, ventilators, vaccines and beds, is seemingly deleted from the memory. It makes you wonder if people’s lives matter. Or to be cynical, whether a preponed Third Wave would suit the agenda to gut the Modi government.

In my view, there are four stakeholders who must be kept in eye from now on in case the Third Wave hits us soon. Their negligence, if not complicity, would deserve a “murder charge” as Madras High Court infamously said about a constitutional body not long ago.

Media first. Indian Express has an edit on “Kerala challenge” today. Below are few portions from its edit any my comment on them in the brackets:

“Kerala’s position is complicated one…a blame game (BJP vs Kerala government) is the last thing the State needs” (What is Kerala’s angst? A standard one of the whiners that it hasn’t been provided with enough vaccine. And guess what, Kerala is the most fully vaccinated of all States in India—20.9% of population vs 4.6% of Uttar Pradesh—barring Himachal Pradesh!)

“It seems the that the state’s initial success in curbing the spread of the infection is now working against it: A majority of its population lack antibodies…” (So how do we reconcile big vaccination numbers with rising numbers? If Delta is the cause, it’s been there for six months. Other states have got hold of it. Why not you Kerala, ought to have been the newspaper’s worry).

“The Kerala government has attempted to strike a balance between lives and livelihoods…” (And what about its’ super-spreader effect on other States, sir? The one you see in Kumbh Mela and don’t see in protesting farmers?)

Judiciary Second. It needs to micro-manage Kerala affair like it did with Delhi. It needs to look at reports of Kerala’s non-cooperation as its’ appearing in newspapers these days. Here’s what Times of India has written this morning, quoting an official:

“Even as the Centre has advised Kerala to impose strict restrictions, the state has indicated that its availability of health infrastructure and low mortality rate so far means it can control the situation.” (No sir,  you can’t, the judiciary ought to reply. Kerala is a national emergency now).

“We (experts) have advised the state to implement strict containment measure to ensure cases are maintained in localised area but they feel mitigation is the best strategy as they feel the rise in cases is because of delta variant.” (The Centre’s advisory of test-track-treat isn’t seen the best ploy for Covid-19 here).

If there was a fit moment for judiciary to invoke its suo motu powers, this is it.

The third and fourth stakeholders are Centre and State government.

It’s time Centre invokes the National Disaster Management Act (NDMA) without worrying about the consequences in judiciary and Lutyens Media, not to say the Opposition by Pinarayi Vijayan government.

But once Centre does it, expect our Lutyens Media, to jump at the throat. It would be seen as politics and not people who are being endangered. It could weaken Centre’s resolve and force them to make unfortunate decisions like it did by letting States handle their own vaccination procurement after Second Wave hit us with force in April.

The Kerala government is not only following its own medical strategy, it’s also lax with lockdowns and restrictions “in trying to strike a balance between lives and livelihoods,” as Indian Express has noted. There is no other state in India which has had logged more Covid-19 cases than Kerala except Maharashtra (34 lakhs in Kerala; 63 lakhs in Maharashtra).

So in essence, Kerala must not lax on restrictions; Centre on enforcing NDMA; judiciary in keeping an eagle’s eye; and Media on being truthful which I know is a big ask but they could try for a change.

Our stakeholders made the mistake of treating Maharashtra with kid gloves as they are doing it with Kerala now.