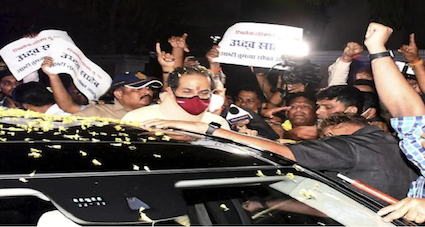 “India in 21st century” is a book just out, being written by eminent historians and academicians.

Karundhati Roy, whose fragility hides the steel of a rare woman, is reading a chapter—“Maha Vikas Aghadi, the MVA”— from the book to an elite audience of business tycoons, media barons; the Picassos and Michelangelos of this age

The chapter abounds in citations from Indian Express and NDTV.

Uddhav Thackeray, long dead, is the tragic hero and his son, Aditya, an exceptional young man—you have the word of Julio Ribeiro, no less—a present-day Abhimanyu who fell to the machinations of his own people.

Uddhav, the Bismarck of India, was a visionary who forged a unique identity with disparate forces, brought peace to Maharashtra when India was burning under the fascist regime of Narendra Modi.

If it involved joining hands with Asaduddin Owaisi and his AIMIM, he did so, as did Gandhi, the greatest Indian, a century ago. Yet he was loyal enough to the memory of his father Balasaheb Thackeray in renaming Aurangabad and Osmanabad in the very last hour of his tenure.

Uddhav, single-handedly, brought a stunning turnaround to the image of a “party of thugs” into one of liberal progressives; secular to the point where he wouldn’t let his MLAs visit Ayodhya lest the creeping communalism casts a shadow on his deep convictions.

Indeed, he was a political juggler of a rare ability who, all this while, never compromised the “Maratha identity” of his party, his millions of followers and of his own too.

Here was a man of exceptional grace and humility that charmed even India’s narcissistic film industry, a man who preferred to spend his time in art galleries and photo exhibitions than entertaining his men whose greed knew no bounds.

His greatest test perhaps was the pandemic that ravaged the 21st century: Covid-19. Even as numbers swelled and deaths mounted, he was steadfast, unruffled, which inspired his health workers on the ground as they went about attending millions, and millions more, till all everyone had to say was: Thank You.

But then a dove in him was felled by his own flock, whom he had picked from Maharashtra’s backwaters, and had helped them soar before they together swooped him down.

As he bid adieu to thousands of his followers who had lined the street between his office and his home, crying, sobbing inconsolably and chanting his name, Uddhav was a picture of calm and only had good things to say about the rebels.

History would remember him as a man who dared to experiment what average politician wouldn’t even think: A courageous man who shrugged off the communal saffron of an overbearing partner and charted a new course before the cesspool of lesser men took him down.

Spot The History You Read

I was squirming in cooking up these lies.

But if it dawns on you that perhaps, just perhaps, that’s how coloured is the history you read, my point is made.

For it’s unlikely you don’t know about Palghar lynchings, Anil Deshmukh, Param Bir Singh, Sachin Vaze and many others.

You are privy to corrupt tales of MVA; the extortion rackets—remember the explosive-laden SUV in front of Mukesh Ambani’s gates—the thrashing of common citizens for innocuous posts or the incarceration of Arnab Goswami and Ketaki Chitale on cooked up charges. A celebrated actress had her house bulldozed for speaking her mind.

You know this government betrayed the trust of its citizens by dumping the alliance for which they had voted; Its police went till New Delhi to nab Nupur Sharma, once with BJP.

Far from having acquired a new peaceful image, his Shiv Sainiks were on rampage till the very last day.

Come to think of it, if its a company that makes a man, how do you think we should judge Uddhav Thackeray to have chosen Sanjay Raut as his mouthpiece?