‘Vultures’ who pass off as journalists, feeding on our tragedy 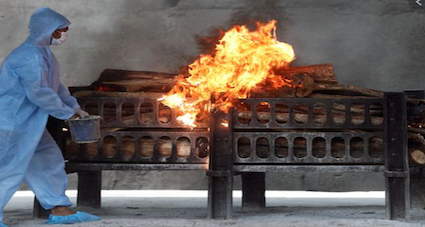 India is suffering from extremely tough times. There are scuffles for hospital beds and oxygen. Black-marketers are harvesting deaths. Our front-line workers, medical staff and cops, are exhausted. People in general are dispirited. But there are vultures who go in the garb of being journalists who are making a meal out of this unfolding tragedy.

Both international and domestic left-leaning media, amid this devastating virus, have been busy looking for an opportunity to manipulate facts.

The media outlet accompanied the article with a tragic image in which an unconscious woman can be seen lying on the road while the other woman is trying to wake her up.

The problem is that the newspaper chose to sensationalise their piece with a photo from the Gas Leakage incident, which took place at LG Polymer chemical plant in a village in Visakhapatnam on May 7, 2020.

Did the photographer fly drones over the crematorium to click pictures? Is flying drones over crematorium permitted? Aren’t final rites a sacred and private act? The same photos were later on shared by Washington Post correspondent Annie Gowen and called those photographs of the funeral pyres as ‘stunning’.

We are told that the western media doesn’t disrespect the privacy of the family. Dignity in death is certainly far more a precious right of any human being than the right to report. But not when it comes to India.

Not only this but Reuters had posted six articles and seen pictures of funeral pyres from India in just two days, all, on their homepage.

Not only foreign media, but Indian journalists are also busy rubbing the salt on wounds. Barkha Dutt chose to sensationalize an issue as sensitive as her father’s death and still nobody dares to question her.

For these journalists concerned about Covid-19 situation in India, the thousands of farmers, cheek-by-jowl, on Delhi’s gates aren’t a problem. That ambulances are being stopped and diverted, which could help save lives, isn’t an issue for these “vulture” journalists. The detours of these urgent medical help and hours wasted isn’t their concern.

Nobody has questioned why Delhi government, in full one year, the hundreds of crores that they could spare for self-promotion in advertisements, didn’t procure a single ventilator in a year.

None of this matters – neither to those political stars nor to these self-proclaimed neutral journalists. For them, it’s just a moment to feed on the dead.