What Hindus are missing in fight vs. Lutyens Media 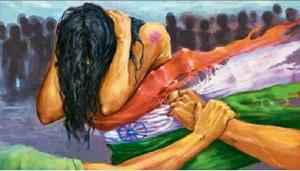 Hindus need to look at how they address the forces against them in India.

It’s alright to be outraged that a Kathua has politicians, actors and presstitutes creating a sustained surround sound while reducing a similar rape in a madarsa akin to a weather bulletin.

You see a Shekhar Gupta plaster his twitter’s wall page with the image of Kathua lawyer; Bollywood bimbos hold placards in protest; Rajdeep Sardesai and Sagarika Ghose convulse through dozens of tweets on Kathua but the Madarsa rape doesn’t interest these clergies of morality.

The same on Biplab Deb. The cabal has woken up to Tripura and are hounding a young politician who was central to a tectonic shift in North East in a truly historic election of independent India. Das is used as an excuse to parody the Hindu gods; there is a silent acquiescing to a profane Western historian calling Rama a “pig”.  Neither “Janeudhari” Rahul Gandhi nor “Why-I-Am-A-Hindu” Shashi Tharoor are offended.

This cabal would hammer away at a Biplab Deb but the constant blabbering and lies of a Rahul Gandhi is met with “his-speech-is-improving” innuendo.

There is a forceful counterpoint—I would term them as “Lone Rangers” henceforth–from OpIndia and SwarajyaMag; Postcard News and PGurus; a few TV news networks stand up to the shameless; erudite voices such as David Frawley, Rakesh Sinha and firebrand Shefali Vaidya rip open this Zanus-faced cabal. Yet it all appears a mine-blast compared to the guided munitions which rain from the sky.

Social Media: The Left-Liberal cabal has only 8-10 voices which it has created and promoted into brands (It has to be a “creation” for they never ever take a critical look as Christo-Islamic forces). The “nexus” works with everyone promoting and shielding each other. Those voices are picked by a similar network abroad. Stray voices, similar themes and a lie is easily brushed into a truth.

Our “Lone Rangers” on the other hand rarely form a formation. At the most a retweet and a shelf-life of a few hours. Mostly, each to his own. There is no method. There is no understanding that a sum is bigger than the parts.

Television: Most of us remember a harebrained Saba Naqvi; a mangy John Dayal or a scruffy Kumar Ketkar from TV debates on Prime Time. Could you name any independent neutral voice you remember? There are dime-a-dozen forceful presences on twitter (What the heck, let me bite my own bullet and name my favourite Dirty Dozen: @mediacrooks, @nesenag, @shefvaidya @unsubtledesi @rahulroushan, @rajivmessage, @davidfrawleyved, @madhukishwar, @mvmeet, @SreeIyer1 @thejaggi and @ARanganathan72). Not all are right-wing voices; some could be overtly critical too of NDA government (like @mediacrooks, @ARanganathan and @thejaggi). Yet, either they shy away or TV networks keep them out. This must change. TV news are very stale and badly needs fresh voices. Social Media must bring out a sustained pressure on them to “open up” TV studios.

Print media: This is the difficult part. Mainstream media, especially English, is already controlled by Left-Liberal cabal. Regional media have a huge role as a counteracting force. They must seek out above independent voices and give them space.

A tactics which we could learn from Lutyens Media is how they create a narrative and then sustain it. They pick up a subject, sustain it with old and new information, new angles, helpful interviews, columns in edits and even anniversaries! And what “Lone Rangers” have done with Madarsa Rape? A customary objection and little else. Haven’t we shifted our focus away from Audrey Truschke too soon? (And don’t give me the BS that it would only make her a star).

It’s all about rallying to a cause. It alone sustains passion and reverses the narrative.

Bollywood: It has long been controlled by dubious funds and Muslim-centric ethos. A “pujari” is always shown lecherous (e.g Kanhaiya Lal or a Shakti Kapoor) while a “Muslim” character is invariably depicted as paanch-time namazi (viz a A.K. Hangal). All the right-minded Indians could do is to expose their duplicity–regularly.

The above four forces–to go with the fifth of school texts and academia–control the narrative. “Lone Rangers” need to grow muscles to counter it. Own ivory towers won’t help. As long as heart is in the right place, differences in IQs, fan-following, language quality, status must not matter. IT MUST NOT MATTER.

“Lone Rangers” clearly suffer from resources. But for their toil and time, sweat and passion, there is little in support. Most of them sacrifice their working hours or leisure time with family to do what they feel is necessary for India’s future. They need be supported, not judged through prejudicial, hierarchical lenses.

These voices need be sustained; be called over to seminars and panel discussions; be invited to educational institutions for lectures; be part of alternative litfests. I have been a journalist all my life and trust me, voices mentioned about talk more sense than my own discredited professional community.

Lack of time ought not to be any excuse. Hit the road in protests on your temples, education and religion. Don’t back off. Only those who assert their identity, retain their identity.

A call must go out to corporate houses. Look at how The Wire gets its funds. They are given funds by a foundation which has trustees such as Aamir Khan, Azim Premji, Ms Kiran Mazumdar-Shaw, TN Ninan. If you can’t spare time to write or debate, at least spare change from your pockets, big or small, and make a difference. Or remain deluded with the story that a hard-working tortoise wins race in the end.